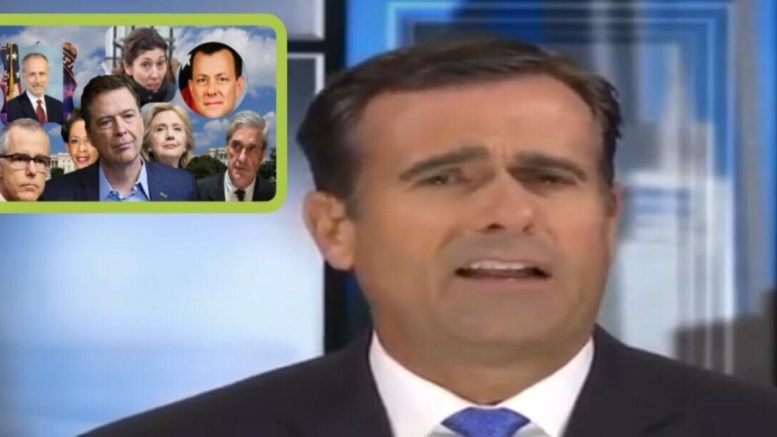 Ratcliffe painted the clearest picture to date of what the FBI allegedly withheld from the surveillance court. (Video Below)

During the interview, Rep. John Ratcliffe explained Congress subpoenaed Glen Simpson, the GPS co-founder of the dirty dossier, that was paid for by Hillary Clinton and the DNC.

According to his lawyers, Simpson plans to plead the fifth amendment, Ratcliffe noted.

Simpson, previously under oath testified to the House Intelligence Committee that he never met with Bruce Ohr or discussed with Bruce Ohr the Steele dossier prior to the October FISA application in 2016 or the 2016 presidential election.

Ratcliffe said, “That is indirect contradiction to what Bruce Ohr told me under oath last month. So I’m not surprised Glen Simpson is taking the fifth. He probably should. He’s in real legal jeopardy. Very clearly, someone is not telling the truth.” (Video Below)

He pointed out that Nellie Ohr, was paid $40,000 by Fusison GPS for her work related to the dossier and it wasn’t disclosed by the DOJ when they presented the evidence to the FISA court.

Maria suggested that there was a group at the top of the FBI and DOJ that didn’t like Donald Trump and they didn’t want him to be President. “They tried to stop him,” she said.

“Well, I think that’s a fair summary. The same folks that prejudged Hillary Clinton’s innocence and prejudged Donald Trump guilt, are the same names and folks whose conduct is at issue, with respect to have evidence was presented or not presented to the FISA court.” Ratcliffe said. (Video Below)

Maria explained there was a lot of strategy going on: a media leak strategy, informants were involved, and a plotted strategy to take Donald Trump down.

Why won’t the President declassify all these documents so the American people can clearly understand what happened here?” She asked.

“That’s a good question for the President of the Untied States. Here is what I can you. All of the documents that Chairman Nunes and others are seeking to declassify, I have seen them. I can tell you as a former federal prosecutor, it wouldn’t expose national security information.” Ratcliffe said.

He continued, “It would expose certain folks at the Obama DOJ and FBI and their actions, and their actions taken to conceal material facts from the foreign intelligence surveillance courts.”

Ratcliff then gave an example that would put everything into context without revealing anything that is classified. (Video Below)

“The underlining pretext to the entire Trump-Russia investigation is the idea that George Papadopoulos had a conversation with an Australian diplomat about getting Hillary Clinton’s emails from the Russians. Hypothetically, if the DOJ and the FBI has another piece of evidence that directly refutes that, they would present both sides of the coin to the FISA court to evaluate the weight and sufficiency of that evidence.”

Ratcliffe suggested that the FBI failed to include evidence regarding former Trump campaign adviser George Papadopoulos.

“Instead, what happened here was Department of Justice and FBI officials in the Obama administration in October of 2016 only presented to the court the evidence that made the government’s case to get a warrant to spy on a Trump campaign associate. Declassify would collaborate what I just told you.” he added.

Ratcliffe also explained that he believes the Mueller investigation is winding down due to “staffing down.” The people that are working for the team are leaving and going back to offices in which they were detailed. He also noted that the special counsel will also accept written answers from President Trump’s lawyers about all matters.

“No charges for collusion or obstruction of justice with anyone associated within the Trump campaign, but a report from Bob Mueller outlining perhaps some questionable conduct. We will be left arguing with our democratic colleagues, whether that rises to an impeachable offense even if it’s not criminal in nature.” He said.

Are you ready to see President Trump declassify? Let us know what you think!