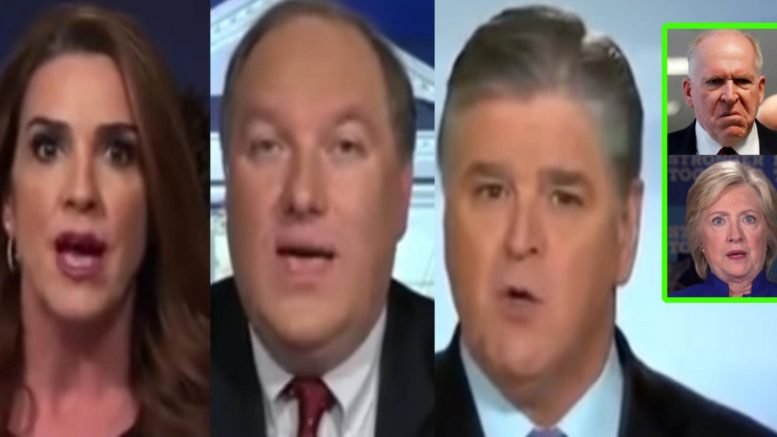 John Solomon and Sara Carter break the news of the second whistleblower in the Clinton Foundation. Photo credit to Swamp Drain compilation with screen shots.

John Solomon and Sara Carter joined Sean for the Hannity Special Friday night. And Solomon and Carter were grinning from ear to ear as they delivered BREAKING news.

Solomon, “an award-winning investigative journalist and the Executive VP at The Hill” said there is now a SECOND whistleblower regarding the Clinton Foundation. (VIDEO BELOW.)

Something HUGE is happening on Monday…hold on to your hats!

The FBI raided the home of Dennis Nathan Cain and now there is second whistleblower regarding the Clinton Foundation.

Hannity confirmed it was not the same whistleblower as Dennis Cain.

Sara said, “I think we’ve got a lot to look forward to on Monday, Sean. And I think that the American people are going to see that there was happenings behind the scenes at the FBI as well as the Department of Justice. And Michael Horowitz has been doing a very deep dive into this.” (VIDEO BELOW.)

“There’s going to be a lot of breaking news in the next months and the months to come.” – Sara A. Carter

The Clinton Foundation has been under investigation and Judicial Watch recently filed a Freedom of Information Lawsuit.

“In a press release, Judicial Watch pointed to a number of suspicious instances that could be indicative of pay-to-play. One related to Douglas Band, a longtime Clinton aide who then served in a top role at the Clinton Foundation and wrote Huma Abedin, Clinton’s deputy chief of staff, in April 2009 to demand a major Clinton Foundation donor be given access to the State Department’s “substance person” on Lebanon,” the Washington Examiner wrote late last month.

🚨THIS JUST HAPPENED! 🚨
Fed Prosecutors Assigned to John Huber Questioned Whistleblower INSIDE THE CLINTON FOUNDATION on Friday
John Solomon told Hannity that a big report is breaking Monday on the investigation into the Clinton crimes.