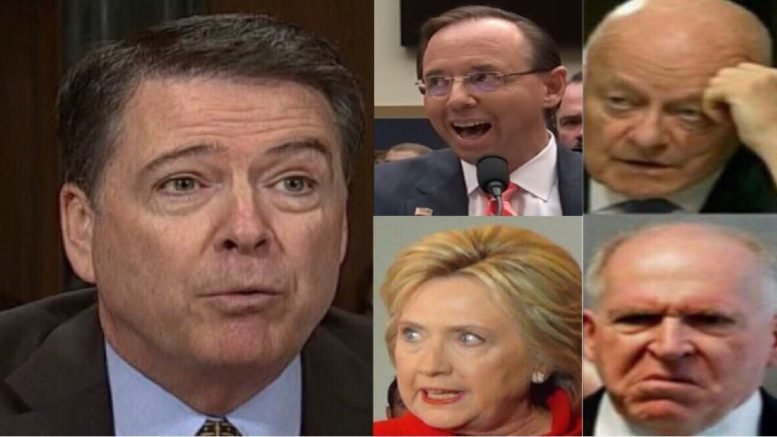 James Comey is going to be in hot swamp water on Friday when he testifies in front of Congress. Photo credit to Swamp Drain compilation with misc. screen shots.

In a blockbuster reveal, Sara A. Carter brought to the forefront what John Solomon knows about the FBI paper trail as it relates to FISA abuse and James Comey.

James Comey will be on Capitol Hill on Friday and will testify behind closed-doors in front of Congress. (MORE BELOW.)

Will Comey sing like a bird since the paper trail implicates wrongdoing by Obama-era FBI and DOJ?

Carter tweeted, “⁦@jsolomonReports⁩ provides important insight into why ⁦@realDonaldTrump should declassify the documents requested by ⁦@DevinNunes⁩ and other lawmakers: FBI email chain may provide most damning evidence of FISA abuses yet.”

John Solomon, award winning investigative journalist and Executive VP at The Hill, announced moments ago, “sources tell me the targeted documents may provide the most damning evidence to date of potential abuses of the Foreign Intelligence Surveillance Act (FISA), evidence that has been kept from the majority of members of Congress for more than two years.”

Not only has the FBI been keeping secrets about the FISA abuse, but they have essentially hidden the information from Congress, too.  When Comey shows up on Friday, you can bet he will be grilled on what he knew about the FBI FISA emails.

Solomon reported, “The email exchanges included then-FBI Director James Comey, key FBI investigators in the Russia probe and lawyers in the DOJ’s National Security Division, and they occurred in early to mid-October, before the FBI successfully secured a FISA warrant to spy on Trump campaign adviser Carter Page.” (MORE BELOW.)

The evidence proves WHY President Trump should declassify.

“The email exchanges show the FBI was aware — before it secured the now-infamous warrant — that there were intelligence community concerns about the reliability of the main evidence used to support it: the Christopher Steele dossier, Solomon wrote.

By declassifying the documents that Nunes and other lawmakers have been asking for, then the proof would be available to the American people that the Mueller special counsel was set-up as a sham or as President Trump has been saying, a certified WITCH HUNT. Click here for video as Solomon exposed the truth about the FBI/DOJ email chain on FISA.

⁦@jsolomonReports⁩ provides important insight into why ⁦@realDonaldTrump should declassify the documents requested by ⁦@DevinNunes⁩ and other lawmakers: FBI email chain may provide most damning evidence of FISA abuses yet | https://t.co/2Xa75P3ihl