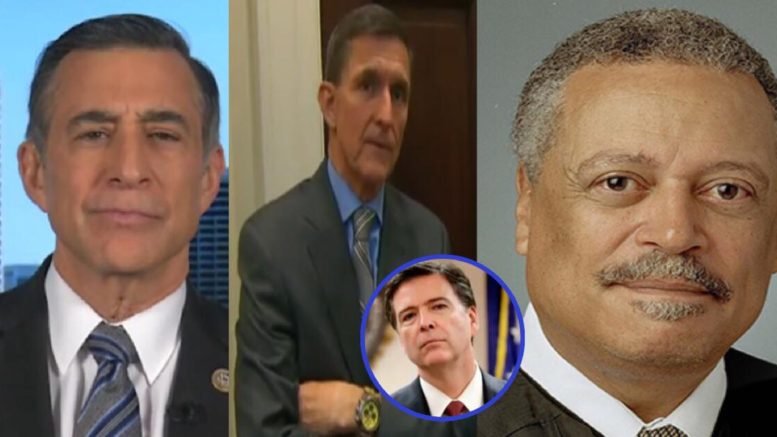 Former FBI Director James Comey is on Capitol Hill for a second hearing where House lawmakers will ask him more questions behind closed doors.

Rep. Darrel Issa (R-CA) joined Harris Faulkner on Fox News Monday amid the hearing, and said that the Justice Department “institutionally continues to not want to cooperate with Congress.” (Video Below)

Issa explained that Judge Sullivan who recently demanded key documents from Robert Mueller, sees Fynn as a General who was lied to and trapped “into a lie,” where the FBI essentially had leverage on him, only to further use it against him.

“This kind of misconduct can only be held accountable by a federal judge, who goes all the way back through three or four Presidents, and is a no-nonsense judge.” Issa said. (Video Below)

Rep. Issa was not surprised when he heard that James Comey admitted to the handling of Michael Flynn was not done properly.

“They’ve been playing fast and loose on ‘how do they get the President’ for a long time.” Issa added, “Every once in a while, he remembers something, and in this case, he apparently remembered that most White House’s would have said, ‘we’re not making these people available, they will all be represented by lawyers. There won’t be any such thing as a harmless question.'”

Issa pointed out that they took advantage and continue to take advantage of a President who is making information available at extraordinary rates, which was much different that former President Obama. “In this case, there’s a real question of did they get what they wanted from Flynn? Apparently they did, but they did by trapping him into a lie.” Issa said. (Video Below)

Comey said after his first round of testimony before the committees on Dec. 7, referring to the special counsel’s probe, “The FBI, for understandable reasons, doesn’t want me talking about the details of the investigation that is still ongoing.”

Citing several aspects of the FBI and Comey’s involvement in the Russia probe before Comey’s dismissal by President Donald Trump last year, Issa said, “There’s certainly a reason to make the record complete.”