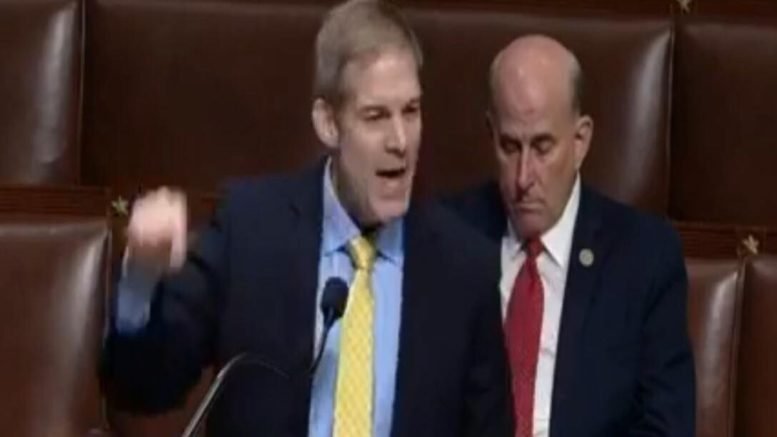 Members of the House Freedom Caucus spoke on the House floor to make a pitch to fund President Trump’s border wall in a spending bill.

The Freedom Caucus gave impassioned speeches Wednesday night, and they laid out strategies they see as the last opportunity for the wall in President Trump’s first term of his presidency. (Video Below)

House Republicans are meeting at the White House Thursday with the President over the short-term spending bill that Senate GOP leaders pushed to fund the government into early 2019 with a stopgap spending bill.

The Freedom Causcus, specifically Reps. Mark Meadows (R-NC) and Jim Jordan (R-OH) are leading the fight to make sure the wall gets funded, and they are pushing for President Trump to veto the bill.

(Related Article: Meadows Just Made A BOLD Pitch On House Floor To Fund Wall: ‘Mr. President, We’re Going To Back You Up’)

On Thursday morning, Meadows and Jordan continued their fight for the American people.

Meadows took to twitter writing, “Fool me once, shame on you. Fool me twice, shame on me. Fool the American people FOUR TIMES, shame on Congress. Secure the border. #DoWhatWeSaid”

Further, Jordan wrote on twitter along with posting a twitter standing up for America. “Today we have an opportunity to show the American people who we are. Do we stand up and fight for their interests? Or do we surrender before the hard work even starts–all for the sake of political convenience? No more excuses. No more games. Stand up and fight.” Jordan said. (Video Below)

While on the House floor, Rep. Jim Jordan said, “Everyone knows the old line: fool me once, shame on you. Fool me twice, shame on me. But, we’re going to have to change that line. We’re gonna need a new one!”

Jordan looked around the room and spoke passionately while he continued his argument. “The new line should be: fool the American people four times, shame on Congress!”

He raised his arms in the air and asked everyone in the room, “Remember what we did in March?” Jordan pointed out the Omnibus spending bill, where the border wall spending wasn’t put on that bill. He added that it wasn’t put on the September bill, and now it’s not on the December bill where Congress had two opportunities to add it.

“Now, they’re talking about kicking it to February 8th! You’ve got to be kidding me. Really, I mean February 8th when Nancy Pelosi is Speaker? I’m supposed to believe, we’re suppose to believe that we’re then going to build the border security wall and keep our promises from the 2016 campaign? No way!” Jordan declared.

He pointed out four different times Congress promised the American people the funding for the wall, but instead they decided to kick the can down the road.

Jordan pointed his finger to the members in the House and grilled them for being spineless. “You know when we should’ve done it? Last week! Last week when the President of the Untied States stood in the Oval Office and told Congresswoman Pelosi, ‘Nancy this is fine. We don’t need to go behind closed doors. Transparency is a good thing.'”

Today we have an opportunity to show the American people who we are. Do we stand up and fight for their interests? Or do we surrender before the hard work even starts–all for the sake of political convenience?

No more excuses. No more games. Stand up and fight.