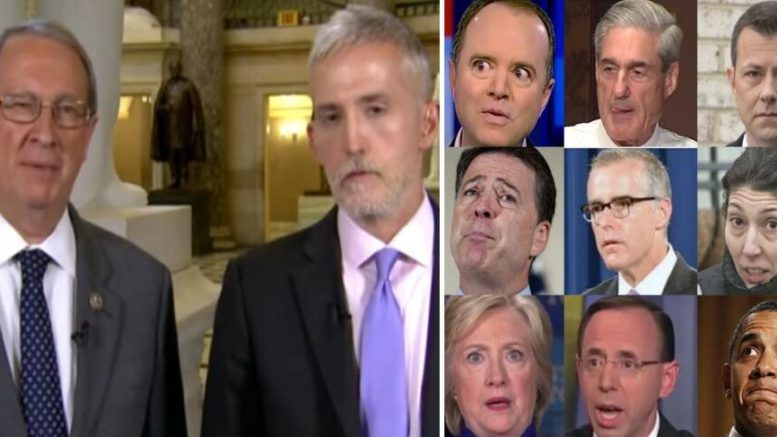 The House Judiciary released key takeaways, conclusions, and recommended next steps amid the joint investigation of the DOJ & FBI’s decisions in 2016 & 2017.

The House Judiciary also tweeted on Friday evening, “Equality under the law is a core American value. Our laws should be administered and enforced with impartiality. This guiding principle has led our joint investigation of the DOJ & FBI’s decisions in 2016 & 2017. From this investigation we are now releasing: – key takeaways – conclusions – recommended next steps.”

From the Judiciary House Committee:

From the Judiciary House Committee:

The Department of Justice Office of the Inspector General’s Report. Inspector General Michael E. Horowitz released a report entitled “A Review of Various Actions by the Federal Bureau of Investigation and Department of Justice in Advance of the 2016 Election.” The report confirmed that former Secretary of State Hillary Clinton’s investigation was handled in an unprecedented way by the Obama Justice Department.

U.S. Attorney John W. Huber appointed. In response to the Committees’ call for a second Special Counsel, Attorney General Jeff Sessions tapped Mr. Huber to investigate the actions of the Department of Justice in 2016 and 2017. Investigating these matters – including the investigative or prosecutorial decisions not investigated by the DOJ IG – is critical to restoring the reputation of both the Bureau and DOJ in the eyes of the American people.

Multiple high-ranking Justice Department employees were fired as a result of their misconduct. Andrew McCabe, Peter Strzok, and others were fired or resigned during the Committees’ investigation, after the investigation and the IG Report exposed their bias during their investigations.  The Department of Justice and the FBI – along with the Inspector General – must continue to identify and eliminate bias, to restore and enhance the American people’s trust in our law enforcement agencies.

Appoint a second special counsel. The appointment of Mr. Huber and the Inspector General’s report were steps in the right direction, but the appointment of a second Special Counsel remains essential as there are many unanswered questions.

Take a closer look into Foreign Intelligence Surveillance Court abuse. Potential abuses of the FISA process must continue to be investigated and remedied.  The FBI’s use and handling of Christopher Steele, coupled with what was not shared with the FISC, in the Carter Page applications and renewals is deeply concerning.

Our Senate colleagues, and possibly others, will continue to investigate. It’s unfortunate that House Judiciary Democrats have stated they will not continue this investigation. The decisions made by the DOJ and FBI in 2016 and 2017 should concern all Americans, regardless of political ideology. I am grateful to our Senate colleagues for vowing to pick up where we left off with this investigation in the new year.

Our 2016 presidential candidates were not treated equally. Former Secretary of State Hillary Clinton received unusual treatment from the Obama Justice Department during its investigation of her use of a private email server for sending and receiving classified information. The integrity of our government agencies must be restored. It is absolutely critical that every individual, regardless of his or her status, be treated equally in the eyes of the law.

The investigators in both investigations were biased against President Trump. Peter Strzok and Lisa Page exchanged more than 40,000 text messages, including messages such as, “Trump is a loathsome human.”  Director Comey himself stated, had he known of their bias, he never would have allowed them to serve on the investigative team.  Nevertheless, both Strzok and Page served on the Clinton email and Russia investigations, with Strzok playing a leading role.

DOJ and FBI’s investigation of Secretary Clinton was over before it began. Former Director Comey wrote a statement exonerating Secretary Clinton months before his public announcement doing so.  He did this before the FBI had interviewed nearly two dozen witnesses, including Clinton herself.  Additionally, the FBI was looking for evidence of “willful intent” in Secretary Clinton’s email activities, even though the relevant federal law doesn’t require it.

We must prevent this from ever happening again. It’s truly unfortunate that Democrats do not see that this is an American issue, not a partisan issue. The actions of the DOJ and FBI in 2016 and 2017 have tarnished the reputations of our nation’s top law enforcement agencies and have undermined Americans’ confidence in their justice system. Equality under the law is a core American value. Our laws should be administered and enforced with impartiality.

Classified findings will be available to Members.

View this document on Scribd
ShareTweet