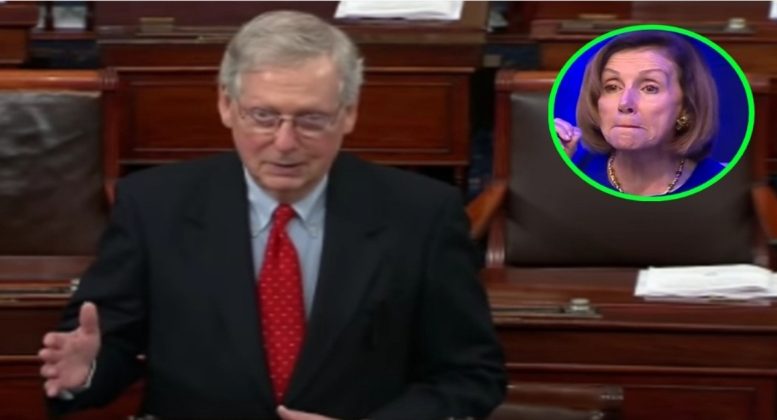 Senate Majority Leader, Mitch McConnell sends message to House about Bill with Wall funding in it or it will never get to the President's desk. Photo credit to Swamp Drain compilation with screen shots.

McConnell sent his message loud and clear. The House must send the Senate a budget that includes funding for the Wall. The Senate will not pass anything to the President’s desk unless it addresses border security. (Video below.)

Democrats offer a “non-starter”. A bill with only their political message and nothing for America’s border security.

If the House sends the Senate a bill that is more “showboat” than “hard work,” McConnell assures the House it will not pass.

He said, “The legislation that the House Democrats are reportedly planning to introduce and vote on tomorrow will not be a serious contribution to the negotiations that are ongoing between the administration and the incoming Democratic majority in the House.”

Additionally, McConnell said, “It isn’t comprehensive. It ignores the needs of border security, it’s exactly the kind of proposal you’d expect if the incoming House Democrats are choosing to stage a political sideshow rather than doing the hard work of helping to govern the country. In other words, a total nonstarter.”

It seems the House Democrats are exposed for their amateur attempt at showboating a negotiation. Instead, the lawmakers need to buckle down and create a Bill that reopens the Government and has a budget for the Wall. (Video below.)

McConnell sends a message directly to the Democrats. He said, “So, will these new Democrats come to Washington ready to roll up their sleeves?”

“And work together and make laws? Or are they going to waste time on partisan showboats that will do nothing to move the Country in a forward manner? That’s the question,” McConnell ended.

First, the bill must pass the House. Then it would move to the Senate where 60 votes are required. Afterwards, it lands on the President’s desk for his signature to make a law. The Democrats are going to have to step up for the good of the Country or 25% of the Government will continue to be shut down. (Video below.)

WATCH as McConnell calls out Democrats for political “sideshows” instead of governing the Country.