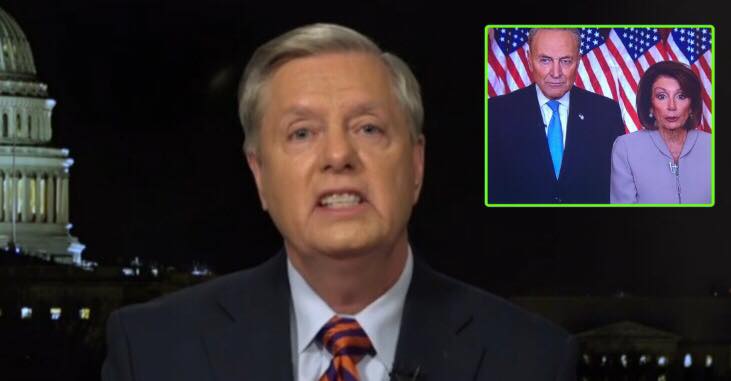 The South Carolina Senator gave huge kudos to the President and backed him 100 percent. (Video Below)

During the interview Tuesday night, Sen. Lindsey Graham proclaimed, “this is the most presidential I’ve seen President Trump. It was compelling, and everything he said was true.”

Graham explained for the wall– that along the southern border– that there are already in place some form of barriers and that the walls need to be extended where it makes sense.

“All the President is saying is… I’d like to provide more security to the American people. It is a crisis, Sean. I’ve tried to be reasonable and practical, but when it comes to immigration, I’m flabbergasted to hear from my Democratic colleagues who have voted for billions of dollars in border security money… that this is manufactured.” He said. (Video Below)

“Was it manufactured when Obama wanted the money? No. Why did you give the money to Obama and Bush if it was a manufactured crisis? Graham asked, referring to Speaker Nancy Pelosi and Senate Minority Chuck Schumer.

“To my Democratic friends: how many Caravans have to rush the border until you believe we have a problem?” Graham asked as he explained that there are 300,000 people waiting for asylum claims to be adjudicated, and 11,000 unaccompanied minors from Central America that cost $750 a day to house them.

He added that illegal immigration is on the rise because the policies are attracting people to the United States. (Video Below)

Graham noted that every Democratic has voted for border security, but when it comes to President Trump, they say no.

“Nancy Pelosi says end the shutdown, Donald Trump says security the border. How about this: let’s secure the border, then end the shut down.” Graham suggested.

“There is a deal to be had here, but it’s hard to get a deal when people you’re dealing with call you racist because you want a border security wall, give you a dollar and say that’s enough, accuse border control agents of gassing children when mobs run toward our border. He added, “we’re dealing with pretty radical people here and we’re never going to get a deal until the radicals are set to the side and we get reasonable people to deal with.”

Graham agreed that walls work, but he’s dealing with a group of people who see their government as the problem. He explained that Democrats see the border control agent as the problem not the mob, ICE agents as the problem and not the illegal immigrant, and they see walls that already exist as immoral.

“You know what I think is immoral, trying to accuse people who are trying to defend the nation honestly and working hard and trying to put their lives at risk as being the problem, not the coyote, not the drug dealer, not the terrorist. Democrats want to fight, they’re gonna get one. If they want to solve the problem, we’ll do that too.” The South Carolina Senator said.

When asked where his fellow Republican Senators stand on the issue and if they are willing to life and death is more important than a delayed paycheck and inconvenience, Graham responded, “I hope Republicans will remember like most Democrats, you voted for 25 billion dollars for border security funding in February in 2018. If it’s a manufactured crisis, Senator Schumer, Speaker Pelosi, why did you vote for a border security package less than a year ago that had $25 billion dollars for border security, including wall money?”

Then he addressed his Republican colleagues and said, “This is the best change we will ever have to help President Trump get border wall funding, steel barrier funding, and at the same time, fix the loop holes. The only way we lose is to give in. If we stand firm, put deals on the table that make sense, we will win this on behalf of American people, but if we undercut the President, that’s the end of his Presidency, and the end of our party, and we deserve to be punished if we give in now.”

Graham also revealed before the end of the week he is going to put legislation together that has wall funding and argue that “we voted for the same thing in the past” before Trump became President, along with putting legal reforms on the table that has been voted for before, help the TPS population, and DACA.

“So what am I gonna do? I’m gonna take bills we’ve all voted for and see if they can be voted for under Trump. The problem is not the policy, the problem is that my Democratic friends don’t acknowledge that President Trump won. That’s the problem.” Graham concluded.