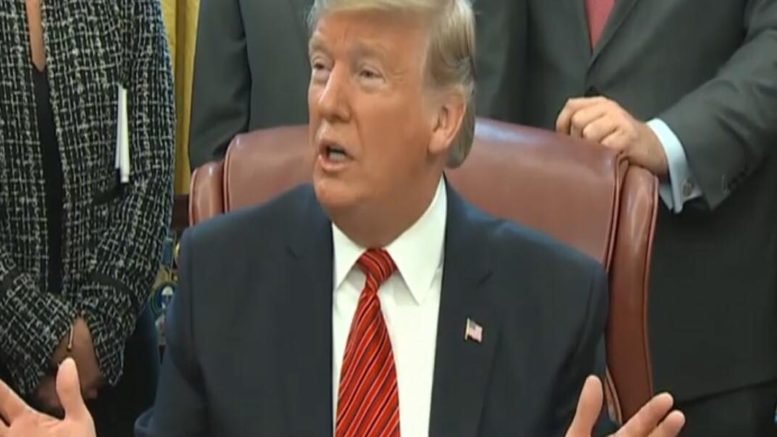 After signing a bill into legislation on Wednesday to combat human trafficking, President Trump warned he would declare a national emergency to build a wall along the southern border if he and congressional leaders cannot agree on wall funding and reopening the federal government.

He remained optimistic that a deal could be reached with Democratic lawmakers to end a partial government shutdown. (Video Below)

The Commander in Chief said last Friday during a news conference at the White House in the Rose Garden that he has the authority to declare a National Emergency at the southern border, which would then authorize him to begin construction on the wall with military funds. He doubled down on that warning again on Wednesday.

When asked by Jonathan Karl, ABC’s chief White House correspondent, why he didn’t announce a national emergency last night during his Oval Office address and when might he do it, President Trump responded, “I think we might work a deal, and if we don’t, we might go that route.”

“I have the absolute right to do a National Emergency if I want.” He said bluntly. (Video Below)

Karl asked what is the President’s threshold on calling the national emergency and President Trump quickly declared, “My threshold will be… if I can’t make a deal with people that are unreasonable.”

The President also praised Senate Majority Leader Mitch McConnell for continuing to fight for the American people on border security.

Further, Jonathan Karl thought he would try his luck and tell the President how to do his job when he asked Trump, “So, why not sign some of these other bills so some workers can get paid in government?”

Karl responded, “I’m saying if you sign that, these workers would start getting paid.”