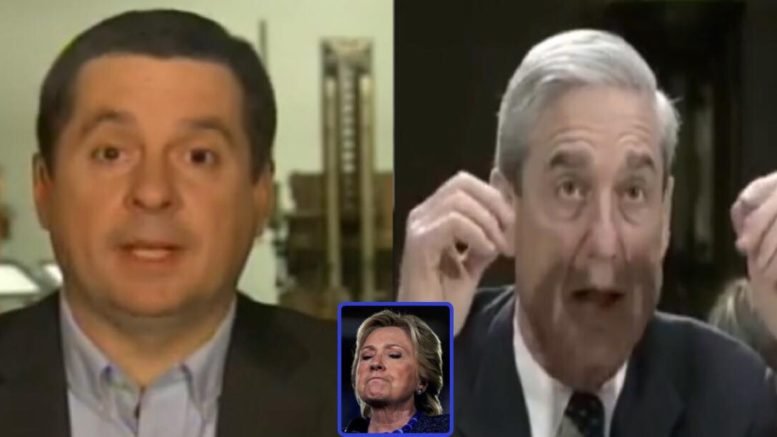 During an interview with Maria Bartiromo on Fox News’ “Sunday Morning Futures,” Rep. Devin Nunes (R-CA), the top Republican on the House Intelligence Committee, weighed in on the ongoing Mueller probe and the investigations Nunes has been pursuing.

Further, Nunes announced that more transcripts will be released this week. (Video Below)

Asked by Maria Bartiromo if he will be making criminal referrals, Devin Nunes said his committee can refer people to the Department of Justice for prosecution for the matters to be investigated.

“The goal of all of this is to make sure everyone is held accountable. We will be taking all the information. I think the walls are closing in, and I think we are getting closer, closer, and closer to the people that need to be held responsible for this.” Nunes said.

He further explained, “We don’t have a police force, and the Republicans don’t hold the gavels anymore in the House. All we can really do is refer people to the Department of Justice for prosecution and for this to be investigated. So, I’m hopeful that will happen with the new Attorney General, but we will continue to compile information. We will continue to conduct interviews, and we will continue to be transparent with the American people on this.”

Nunes believes there is proof the DOJ used Hillary Clinton’s opposition research from the unverified Steele Dossier in their “scope memo” to launch Robert’s Mueller’s witch hunt. (Video Below)

“We have no idea what’s in there, okay? I’m just speculating here, but I believe it’s very possible that they used uncorroborated information that came from the Clinton Campaign and that could be in there as part of what they told the special counsel to do, which would be a major, major problem.” Nunes announced.

Maria chimed in, “Major problem, being against the law!” (Video Below)

Nunes continued, I don’t understand, why would you not be public about this? We’ve had the special counsel now…. it goes on and on and on, and it never ends. They are getting people on process vows. They put forth information that makes it look like nice story telling, because when you read these indictments, it reads like a secret spy novel… of all these characters hanging out with Russians.”

He added, “But the truth is, they’re getting them for process vows, and there’s no evidence of collusion with Russians, except for the obvious people that were colluding with Russians, which was the Clinton campaign and the Democrats.”

"We still have not see.n the 'scope' memo which launched mueller special counsel. – ⁦@DevinNunes⁩ "it's possible it's Clinton dirt only that launched special counsel if that's it, they have s big problem" ⁦@SundayFutures⁩ ⁩ ⁦@FoxBusiness⁩ ⁦@FoxNews⁩ pic.twitter.com/MhpS4rqKbk