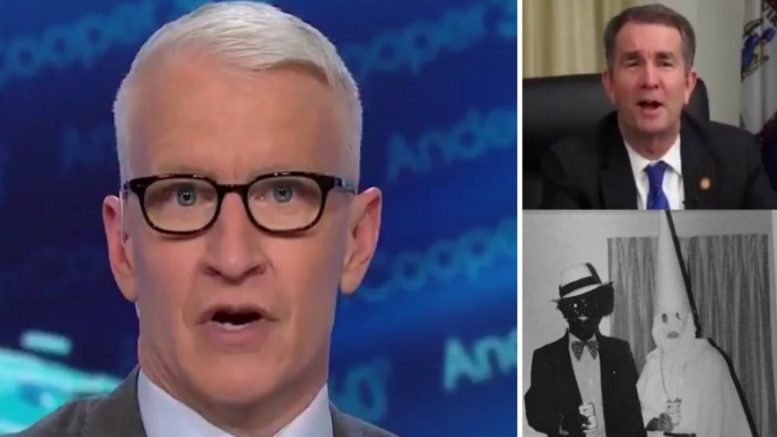 In a time where liberal mainstream sources are trying to rebound after spreading a series of false stories, the stakes are higher than ever to get every bit of facts correct.

CNN, however, is not making matters any better as they were caught making a mistake on Anderson Cooper’s program.

During AC360, Cooper was covering Virginia Governor Ralph Northam and the fallout he’s facing after a photo that surfaced from his medical yearbook showed a man with a painted black face posing with another dressed in a KKK outfit.

Northam, a Democrat, admitted that one of the men in the photo is him. And now, leaders of the Democrat Party and major organizations are calling on him to resign.

This matter clearly is not good for Democrats, as they constantly try to pin racism on President Trump and the Republican Party. However, while CNN played a tape of Northam apologizing, the network labeled the governor as a “Republican”.

A clip taken from AC360 that was spread on social media, shows the mistake CNN made during their Northam segment.

Related Article: Sekulow Warns MSM Amid BuzzFeed’s Fallout: ‘Speculation With No Factual Backup Is Dangerous To Our Republic’

Watch the Chyron at the bottom as they show the video of Northam.

Was it an honest mistake or just another dirty trick by liberal media to save face for the Democrat Party? You be the judge!