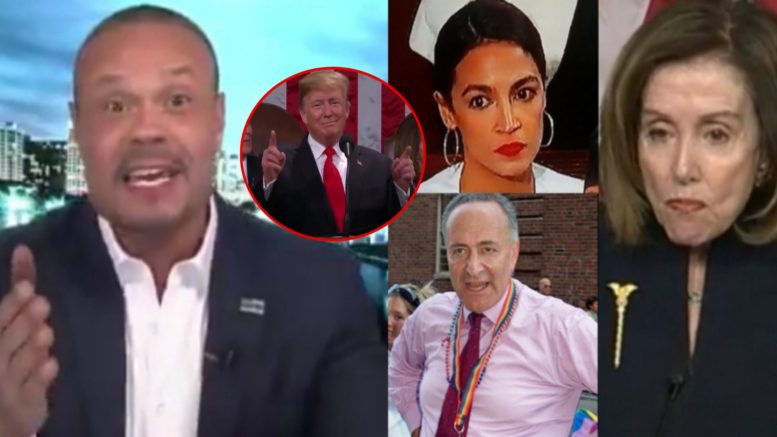 On Saturday night, Dan Bongino joined Judge Jeanine Pirro to discuss the latest and greatest in the world of politics.

They covered topics, including Jim Acosta constantly getting destroyed by Trump and the latest revelations surrounding McCabe and Rosenstein. But one of the most explosive parts came as the pair were talking about President Trump’s decision to declare a national emergency on top of honing in billions in “pots of money” to fund the wall.

Bongino voiced his frustration with the media on how they are not recognizing the fact that President Trump won the funding battle to get the wall, and that they are, instead, concerned on how Democrats can fight the national emergency in court.

He focused on the “pots of money” that are automatically available without a legal fight that Trump now has at his disposal from different departments of the executive branch, and are not tied to a national emergency.

Related Article: Graham Chimes With Rush & Signals How Declaring A Nat’l Emergency Is A Win-Win: ‘We’d Be Stupid As A Party Not To Stand Behind Him’

In terms of how President Trump handled the overall fight against Democrats, Bongino said, “He totally outmaneuvered them.” Video Below

Bongino added, “It’s not a great bill overall, President Trump already acknowledged that. But it’s no secret there are things in the there we don’t like.”

As far as the funding issue, however, Bongino said Trump “completely wrecked the Democrats on this.” And so, he laid out the money Trump has access to without legal dispute, including $600 million from the Treasury Forfeiture Fund and $2.5 billion from the Military Construction Budget.

He concluded, “By the time he gets to the emergency declaration, that could be a year and a half or two years away, the wall is already being built by money already allocated.” Bongino continued, “He’s almost at his $5 billion already, but nobody is talking about this because the media doesn’t want to acknowledge that Trump won this round again!” Video Below

"The media doesn’t want to acknowledge that President Trump won this round again.” – @dbongino on the border wall fight pic.twitter.com/0XKWMIKdN0