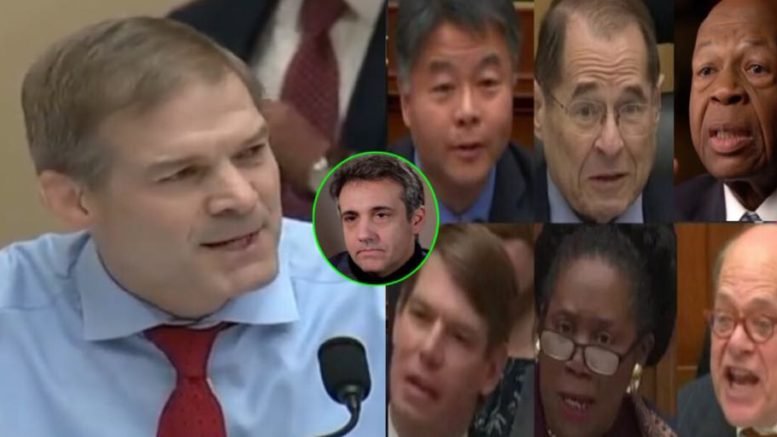 The top Republican on the House Oversight Committee, Rep. Jim Jordan (OH), took to Twitter on Wednesday where he mocked Democrats and their “first big witness.”

Further, he came out swinging and dropped a statement after Oversight Chairman Elijah Cummings (D-MD) announced that their “first big witness” would testify publicly before the panel next Wednesday, February 27.

Reps. Jordan and Mark Meadows (R-NC) wrote a joint letter to Cummings last week saying that Cohen would not be a credible witness because he admitted to having lied to Congress, and they asserted that such a hearing does not serve the committee’s investigative interests.

However, obstructionist Democrats only have one thing on their mind, which prompted Jordan to release a new statement on Thursday. (Continued Below)

Jordan said Michael Cohen’s appearance before the panel next week will be “Phase One of the Democrats’ coordinated campaign” to impeach President Donald Trump, and blasted Democrats for orchestrating a “charade” meant to embarrass the President.

The top Republican on the House Oversight Committee began in his press release, “I am disappointed and disheartened that Chairman Cummings’s first major hearing will feature Michael Cohen as phase one of the Democrats’ coordinated campaign to remove the President from office.”

Jordan continued, “Giving a platform to Mr. Cohen is beneath the dignity of the Congress and I am saddened that Democrats have sunk so low as to promote an admitted liar just to satisfy Tom Steyer and the political forces on the left who will settle for nothing less than impeachment. This charade is an affront to our Committee’s constitutional obligations.” (Continued Below)

“Our system of justice only works when people tell the truth,” Mr. Jordan said.

Jordan’s statement further said, “That’s why the law provides severe criminal penalties for misleading those entrusted by the public with safeguarding our Constitutional system of government. Mr. Cohen cannot be trusted to partake in honest fact-finding before our body. He’s said so himself – to a federal judge – when he plead guilty to lying to Congress.Yet, Chairman Cummings is providing a Congressional forum for Mr. Cohen to avenge his grudge with the president and further feed his insatiable desire for celebrity while being a patsy for political aims of the far left.”

“Moreover, I have serious process concerns with this hearing,” Jordan said. “No one should be scared of the truth, but everyone should be scared when the deck is stacked in favor of a liar. The Chairman indicated that he will be limiting the topics of the hearing to only a few areas of inquiry – all serving his interest in finding grounds for impeachment. I will not stand by quietly while an admitted liar comes before the Committee. Our Members intend to question Mr. Cohen about the crimes he pleaded guilty to, other criminal activity he participated in but refused to disclose, his international financial dealings, and a long list of other probative activities.”

Cohen is scheduled to testify before the Intelligence panel the next day and is expected to soon appear before the Senate Intelligence Committee, which has already issued him a subpoena. On Wednesday, a federal judge granted Cohen’s request to report to prison on May 6 — two months later than U.S. District Court Judge William Pauley had ordered, according to Politico.

Dems announce Michael Cohen hearing next Wednesday at 10 am.

(Related: Jordan Lays Out Five Critical Missteps Dems Made Over The Week That Show Their True Colors)