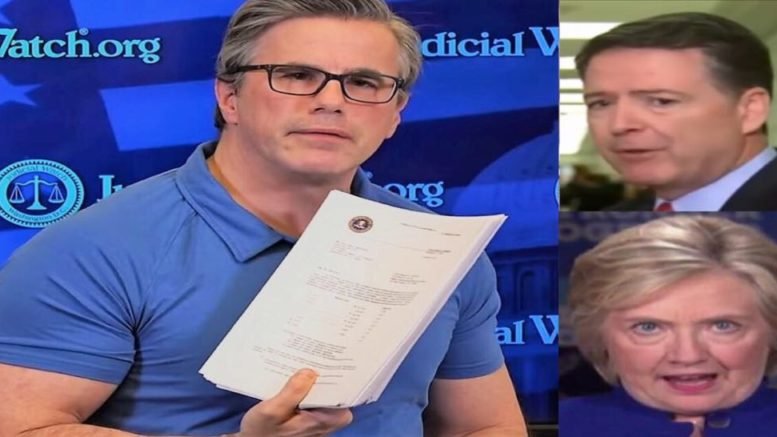 America’s Watchdog, Tom Fitton, the President of Judicial Watch, is doing all the heavy lifting for the truth and the rule of law.

In a press release, Fitton uncovered a big batch of emails that confirm a bribery offer by the State Department to the FBI in order to protect Hillary Clinton. (Videos Below)

Judicial Watch caught the FBI in another cover-up to protect Hillary Clinton. The records indicate that the FBI is hiding a chart detailing possible violations of law by Hillary Clinton and the supposed reasons she was not prosecuted.

The newly obtained emails came in response to a May 21 order by U.S. District Judge Reggie B. Walton to the FBI to begin processing 13,000 pages of records exchanged exclusively between Strzok and Page between February 1, 2015, and December 2017. The FBI may not complete review and production of all the Strzok-Page communications until at least 2020, according to JW.

JW further states, three days after then-FBI Director James Comey’s press conference announcing that he would not recommend a prosecution of Mrs. Clinton, a July 8, 2016 email chain shows that, the Special Counsel to the FBI’s executive assistant director in charge of the National Security Branch, whose name is redacted, wrote to Strzok and others that he was producing a “chart of the statutory violations considered during the investigation [of Clinton’s server], and the reasons for the recommendation not to prosecute…” (Videos Below)

Redacted] writes: I am still working on an additional page for these TPs that consist of a chart of the statutory violations considered during the investigation, and the reasons for the recommendation not to prosecute, hopefully in non-lawyer friendly terms…

Strzok forwards to Page, Jonathan Moffa and others: I have redlined some points. Broadly, I have some concerns about asking some our [sic] senior field folks to get into the business of briefing this case, particularly when we have the D’s [Comey’s] statement as a kind of stand alone document. In my opinion, there’s too much nuance, detail, and potential for missteps. But I get they may likely be asked for comment. (Videos Below)

[Redacted] writes to Strzok, Page and others: The DD [Andrew McCabe] will need to approve these before they are pushed out to anyone. At the end of last week, he wasn’t inclined to send them to anyone. But, it’s great to have them on the shelf in case they’re needed.

[Redacted] writes to Strzok and Page: I’m really not sure why they continued working on these [talking points]. In the morning, I’ll make sure Andy [McCabe] tells Mike [Kortan] to keep these in his pocket. I guess Andy just didn’t ever have a moment to turn these off with Mike like he said he would.

Page replies: Yes, agree that this is not a good idea.

Neither these talking points nor the chart of potential violations committed by Clinton and her associates have been released.

[Read here] for the full press release and more of the exchanges between Peter Strzok and Lisa Page.

The direct link to the emails can be [read here]

Judicial Watch recently released  215 pages of records from the DOJ revealing former FBI General Counsel James Baker discussed the investigation of Clinton-related emails on Anthony Weiner’s laptop with Clinton’s lawyer, David Kendall. Baker then forwarded the conversation to his FBI colleagues. The documents also further describe a previously reported quid pro quo from the Obama State Department offering the FBI more legal attaché positions if it would downgrade a redaction in an email found during the Hillary Clinton email investigation “from classified to something else.”