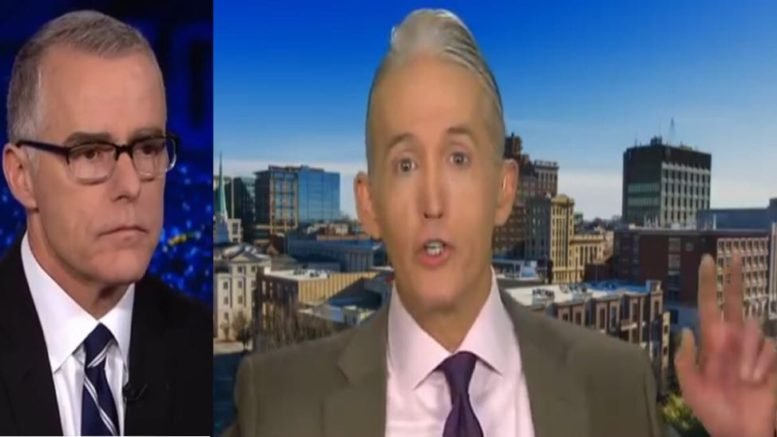 Trey Gowdy joined Fox News Sunday, with host Maria Bartiromo during “Sunday Morning Futures”, where he weighed in on House Intelligence Committee Chairman, Adam Schiff, and his claim of having “Russian collusion” on President Trump.

Maria Bartiromo began by pointing out Adam Schiff’s “claim” of having “circumstantial evidence” of collusion between the Trump campaign and the Russians.

She asked Gowdy, “How’s it possible that he has not corrected himself at this point since we’ve heard from the Senate, the House, the DOJ and now through Andrew McCabe’s own words — the FBI, that we have yet to see any collusion?”

Gowdy responded and explained Schiff’s approach. “Well, he never goes on shows where he’s going to be pressed on it. What a brilliant strategy Adam has. I’m gonna make this bombastic statement completely unsupported by the facts, but I’m never going to go on any show where I’m asked about it.”

Then, he pointed out that the House intelligence committee, the Senate Intelligence Committee, and Mueller’s indictments have found no evidence of conspiracy between the Trump campaign and Russia. (Video Below)

“There’s never been a witness whose alleged conspiracy between the Trump campaign and Russian. And yet, Adam Schiff, that three-eyed raven, Adam Schiff, who can see things nobody else can see, says he has evidence more than circumstantial– not quite direct, by the way, who didn’t go to law school. There’s no such thing. Gowdy reiterated, “There’s no such thing as evidence that’s not circumstantial or direct. But, Adam has seen it, and he’s never pressed on it.”

Maria asked Gowdy what he makes of Andrew McCabe going around on networks, even though McCabe has criminal charges referred to him by the Inspector General.

Gowdy laid down hammer next. (Video Below)

Andy McCabe had four opportunities to tell the House or the Senate what he told CBS.