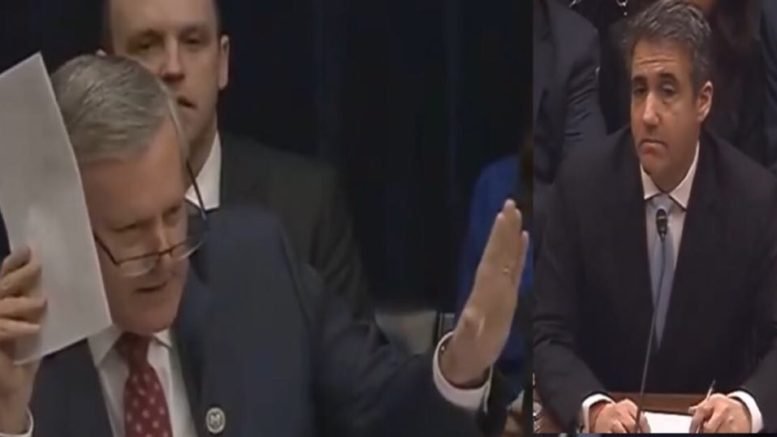 Rep. Mark Meadows (R-NC) caught Cohen in a lie during the hearing, but Chairman Elijah Cummings seemed to cover for Cohen and didn’t care to hear the truth. (Videos Below)

During the hearing, Mark Meadows pressed Michael Cohen on payments he received from Kazakhstan and Cohen tried to spin the story.

Related: Cohen Says He Got Paid Big Money For Being A ‘Nice Guy’, Meadows Fires Back: ‘The Record Reflects You’re Not A Nice Guy’)

“Mr. Cohen, everything’s been made of your lies in the past, I’m concerned about your lies today. Under your testimony just a few minutes ago, to me, you indicated you had contracts with foreign entities. And yet, we have a truth and testimony disclosure form which requires you to list those foreign contacts for the last two years. And yet, you put ‘n/a’ on there, and it’s a criminal offense to not have that accurately.” Meadows said.

Meadows asked, “So when were you lying? Either the testimony to me earlier today or when you filled out the form? (Videos Below)

Chairman Elijah Cummings slammed down the gavel and said Meadows’ time was up, but allowed Cohen to answer the question.

“His questions… unfortunately, I don’t have an answer for his question.” Cohen responded.

At that point, Meadows wanted an answer, but Cummings defended Cohen. (Videos Below)

Meadows pointed out that when Republicans were the majority they allowed witnesses to answer, but Cummings didn’t care. Instead he rolled his eyes, slammed down his gavel and called for regular order.

“He’s under oath to tell the truth; one of them is not accurate, Mr. Chairman!” Meadows fired back.

Cummings didn’t allow for an answer and covered for Cohen.

Meadows got another change to ask Cohen about his foreign entities later and found out that Cohen lied to him.

“You know it’s just one more example, Mr. Cohen, of you skirting the truth.” Meadows declared.

Then, Meadows wanted to know if Cohen or his counsel was advised to withhold his written testimony to the committee at the latest possible minute.

Cohen claimed he was up late writing it.

“So you were writing it last night, Mr. Cohen? Don’t give me that bull!” Meadows fired back.