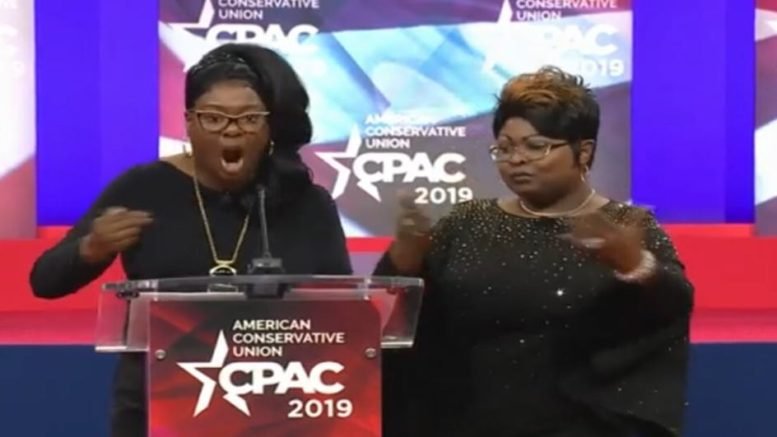 Diamond and Silk took to the stage at the Conservative Political Action Conference (CPAC) on Thursday, where they unloaded in a fiery address on a number of subjects.

Diamond and Silk fired up the crowd at CPAC that led to several chants of “USA”, applause, cheers, and even laughs.

“First of all, we want to say thank you to CPAC for giving two conservative black chicks who are down with politics the opportunity to be here. I’m not gonna be here long — but I just came here to talk about what makes America great.” Diamond began.

Diamond expressed to the cheering audience, “We have the right to act, speak, think what we want without hindrance and restraint from our government. We are one nation under God, baby.” (Video Below)

“Understand that!” Silk followed up, as the crowd chanted “USA!”

“And here is what I don’t understand,” Diamond said. “What don’t you understand?” Silk asked. (Video Below)

Another area of focus for the Democratic Party that seemed to peeve the two commentators: the multiple investigations into alleged, but still unproven, improper Russia collusion by the Trump team, per Fox News.

“If you cared about democracy, you would have accepted the outcome of this election,” Diamond said. (“That’s right. Woo!” Silk said as the audience again cheered.)

“You preach it, girl,” someone shouted from the audience. Later, an audience member interrupted the two to insert the word “sucks,” loudly, after Diamond mentioned the word “socialism.”

Next on the agenda: taking on two leading Democratic presidential candidates — U.S. Sens. Kamala Harris of California and Elizabeth Warren of Massachusetts — who have said they support reparations for black Americans affected by slavery, reflecting a shift in the importance of race and identity issues within the party, per Fox News.

“And to Kamala Harris and Elizabeth Warren — you can keep your reparations. You don’t get to buy my silence. We will never let the Democrat Party to forget that they are the party of Jim Crow. They are the party of segregation. Never let ’em forget it.” Diamond expressed.

Regarding fake hate crime hoaxes, Diamond and Silk had a simple message: “When they try to play the race card, I want you all to stand up and play the Trump card so that we can win!”

Next, they slammed Rep. Ilhan Omar (D-MN) for her anti-Semitic attacks.

“Listen, we’re not governed by sharia law, we’re governed by constitutional law. We stand with Israel, and you need to know that,” Diamond said. (Silk: “Understand that! No sharia law! None of that!”)

Diamond said Democrats are cynical political opportunists — “they only smear who they fear!”

“America is the greatest country on earth,” Diamond added.