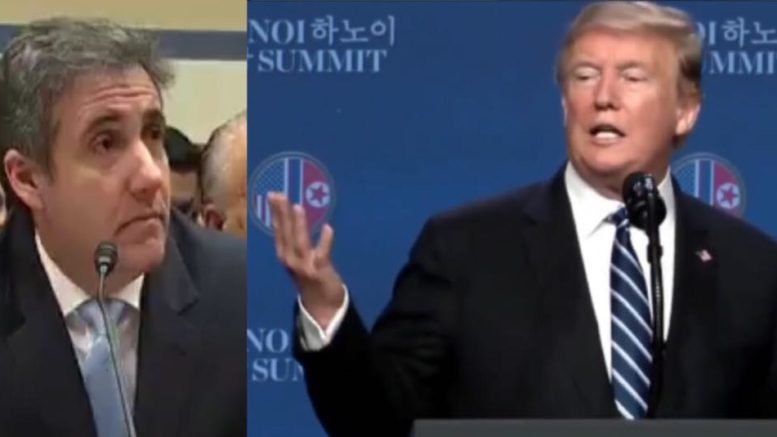 President Trump, while taking questions from the press in Hanoi, Vietnam, weighed in on the aftermath of Michael Cohen’s public testimony led by the House Oversight Committee.

Trump slammed Democrats for their nothing burger investigation and their “star witness.” (Video Below)

President Trump responded to Michael Cohen’s accusations from his Wednesday testimony calling it a “fake hearing” and “shameful.” He further added it was a “terrible thing” to have it while he was overseas.

The reporter asked Trump, “He called you a liar, a conman, a racist, what’s your response to Michael Cohen?”

The Commander in Chief replied, “It’s incorrect. It’s very interesting, because I tried to watch as much as I could, but I wasn’t able to watch too much, because I’ve been a little busy.”

The President also pointed out, “He lied a lot. It was very interesting because he didn’t lie about one thing.”

“He said no collusion with the Russian hoax. And I said, ‘I wonder why he didn’t just lie about that too, like everything else. I mean, he lied about so many different things, and I was actually impressed– he didn’t say ‘well, I think there was collusion for this reason or that.’ He didn’t say that. He said no collusion, and I was a little impressed by that, frankly.” Trump said.

The President added that Michael Cohen “could’ve went all out”, but he only went “95% instead of 100%.” (Video Below)

The Commander in Chief reiterated, “The fact is there is no collusion, and I call it the witch hunt. This should never happen to another President. This is so bad for our country. So bad. You look at this whole hoax. I call it the Russian ‘witch hunt’. I now add the word ‘hoax’. It’s a very, very bad thing for our country.”

President Trump on Wednesday, before the hearing, took to Twitter and wrote, “Michael Cohen was one of many lawyers who represented me (unfortunately). He had other clients also. He was just disbarred by the State Supreme Court for lying & fraud. He did bad things unrelated to Trump. He is lying in order to reduce his prison time. Using Crooked’s lawyer!”

(Related: Trey Gowdy Reacts To Key Aspects Of The Cohen Hearing: ‘The Real ‘Wow’ Was [The Media’s] Reaction When Repubs Were Accused’)