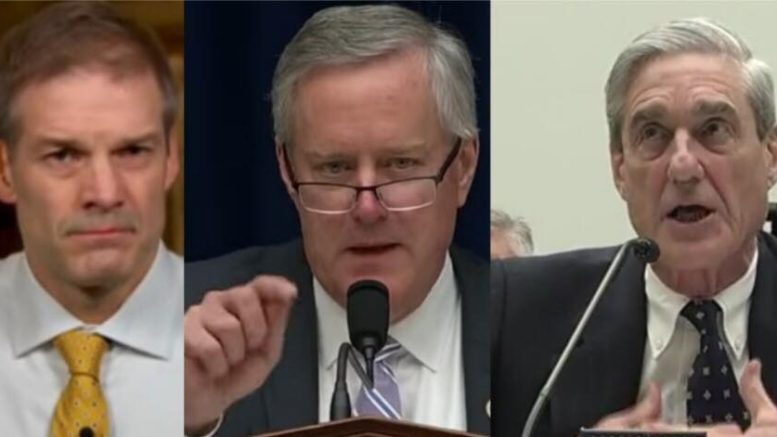 Reps. Mark Meadows (R-NC) and Jim Jordan (R-OH) are fighting hard for the American people to  uncover the truth and expose the corruption and lies within the FBI and DOJ during the 2016 presidential election.

The congressmen sent a letter to Attorney General William Barr on Friday requesting information about the actions of two high profile prosecutors on the Special Counsel’s team.

Reps. Mark Meadows and Jim Jordan want to know about the actions of two senior members of the Special Counsel’s Office, Andrew Weissmann and Zainab Ahmad, and their knowledge of the information in the Steele Dossier in 2016.

The letter to Attorney General William Barr, in part reads, “In 2016, prior to the presidential election, both Weissmann and Zainab were part of small group of Justice Department officials communicating with then -Associate Deputy Attorney General Bruce Ohr about the anti-Trump dossier information collected by an FBI source, Christopher Steele. According to Ohr, Steele was “desperate’ to prevent then-candidate Donald Trump from becoming President – a bias Ohr communicated to the FBI. Ohr testified he also conveyed Steele’s information to Weissmann and Ahmad in 2016- well before Special Counsel was appointed.” Meadows and Jordan wrote.

The letter goes on to state the standards for the appointment of the Special Counsel. “Under federal regulations governing the appointment of a special counsel, the Attorney General should appoint a special counsel when he or she determines an investigation by the Department of Justice “would present a conflict of interest for the Department” and “it would be in the public interest” for the investigation to occur outside of the normal chain of command. (Continued Below)

Meadows and Jordan additionally wrote, “In naming Mueller as Special Counsel in May 2017, Deputy Attorney General Rod Rosenstein emphasized the need for public confidence, explain that “a Special Counsel is necessary in order for the American people to have full confidence in the outcome “of the investigation.”

“Since beginning our investigation in October 2017, we have obtained evidence of political bias and self-described “unusual” conduct within the Department raising questions about the indepence of the Special Counsel’s Office” The congressmen wrote and listed several employees of the Special Counsel’s Office that are affiliated with political opponents of President Trump such as Peter Strzok and Lisa Page who were caught having a political bias against the President. Further they discussed stopping Trump from becoming President and having an “insurance policy in case of a Trump presidency.” The congressmen stated.

They further noted that Ohr’s testimony now raises additional questions about Weissman and Ahmad. (Continued Below)

Meadows and Jordan showed clear-cut evidence from Bruce Ohr’s testimony “months after” the Special Counsel investigation began that lays out when Christopher Steele, Glenn Simpson, and Nellie Ohr delivered anti-Trump information to directly to Ohr, who in turn, delivered the information to his then- Department colleagues, Weissman and Ahmad.

The letter further states that Weissman and Ahmad may not be independent.

“Weismann and Ahmad’s of biased information before their appointment to Special Counsel’s Office puts into question their impartiality, the very reason for establishing an independent Special Counsel investigation.” They wrote.

Meadows and Jordan further asked for the following information:

Reps. Meadows and Jordan concluded by asking Attorney General William Barr to please provide this information as soon as possible, but no later than 5:00 p.m. on March 15, 2019.

(Related: Sidney Powell Exhibits Why Mueller’s Report Will Likely Be Unfair: ‘[Weissmann] Is A Master Manipulator Of The Media’)