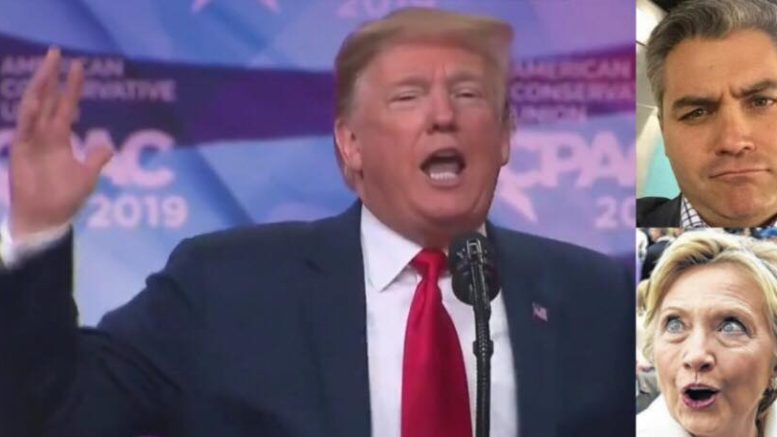 President Trump spoke during the Conservative Political Action Conference (CPAC) on Saturday and took a few jabs at the media.

He called out the media for the dirty games they play, all the while, they collude with Democrats. (Video Below)

During his speech, President Trump said that he’s learned he has to be a little careful what he says, because the media twists and turn everything word he says.

“If you tell a joke, if you’re sarcastic, if you’re having fun with the audience, if you’re on live television with millions of people and 25,000 people in an area…” He began.

He continued mocking the media with sarcasm and said, “And, if you say something like ‘Russia! Please, if you can, get us Hillary Clinton’s emails… please, Russia please!”

The crowd roared with cheers and laughs and the President threw his hands up in the air mocking the media again and said, “Please Russia, get us the emails! Please!” (Video Below)

Soon after, the crowd started chanting, “Lock her up! Lock her up!” Referring to Crooked Hillary.

Trump continued, “So, everyone’s having a good time. I’m laughing, we’re all having fun… and then that fake CNN and others say….”

“He asked Russia to go get the emails!” The President continued as he reenacted a voice from the media. (Video Below)

“Horrible! I mean, I saw it like two weeks ago. I’m watching, and they’re talking about about one of the points. ‘He asked Russia for the emails.’ These people are sick! And I’m telling you, they know the game.” President Trump declared.

He added while pointing directly to the media, “They know the game, and they play it dirty. Dirtier than anyone’s ever played the game. Dirtier than it’s ever been played.”

Further, President Trump said, “I’m totally off script right now. And this is how I got elected — by being off script.”

President Trump mocks the media for thinking he was serious when he said during the campaign that Russia should get Hillary Clinton’s emails, says: “These people are sick” pic.twitter.com/oM6aIS3sV3

President Trump: “I'm totally off script right now. And this is how I got elected — by being off script" pic.twitter.com/UJAtArecba