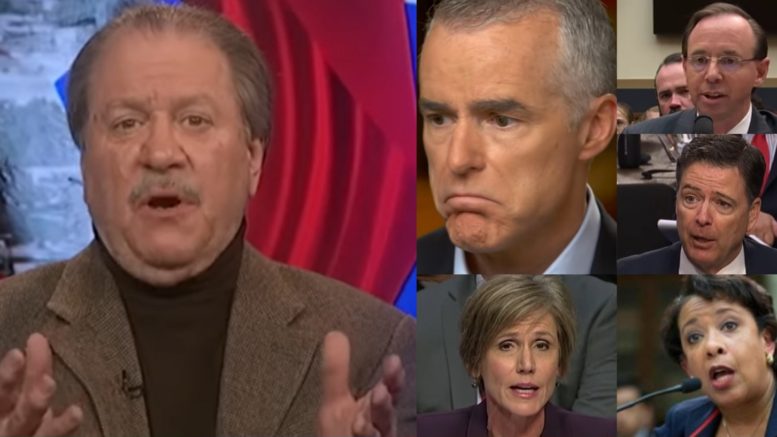 Joe diGenova joined Lou Dobbs to discuss the pending Mueller report that is rumored to be completed within weeks and what to expect out of newly appointed Attorney General William Barr moving forward.

During his interview, diGenova squashed the notion that Adam Schiff could successfully subpoena Robert Mueller if Barr chooses not to make the entire report public, and he said Schiff is only trying to get publicity by making such a threat.  He then discussed Barr’s new role as Attorney General and explained why he believes former Obama officials and Democrats are terrified by it.

When asked if he thinks former officials, such as Andrew McCabe, who allegedly abused power and plotted a coup against President Trump will ever be prosecuted, diGenova responded, “Yes, I think they will be.”

He said, “I expect Bill Barr to investigate this, and I expect people to be charged, including McCabe and others.”

He continued, “It’s not gonna happen over night, but Mr. Barr is a very, very serious Attorney General and they are scared to death of him inside the FBI and the Department of Justice at the highest levels.” Video Below

DiGenova said Inspector General Michael Horowitz has been very limited in the scope of his investigation and power. But now, Barr is able to issue subpoenas to both former and current officials, he can carry out Grand Jury investigations and he can issue indictments.

With all of that taken into account along with the appointment of Deputy AG Rosen, diGenova strongly believes an investigation will happen very quickly.

In conclusion, diGenova gave his take on if things will change in the FBI and DOJ moving forward with Barr as the Attorney General. He said, “I think the presence of Barr sends shutters across the street at the FBI headquarters, but also shouts of joy from people within the FBI and Department of Justice who realize what a horrible thing James Comey, Loretta Lynch, Sally Yates and a group of other individuals did to those venerable organizations.” Video Below