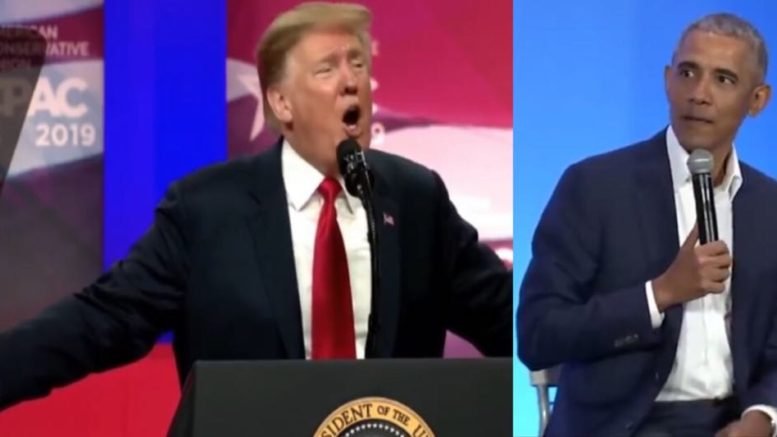 President Trump spoke during the Conservative Political Action Conference (CPAC) Saturday and fired up the crowd.

He touched on the midterm elections and took a shot a Barack Obama, who campaigned for Stacey Abrams and failed miserably. (Video Below)

During his speech, President Trump praised Republican Governor, Brian Kemp, who he campaigned for during the November 2018 midterms.

He explained that Kemp had a tough race against the “new star” of the “Democrat party”, Stacey Abrams.

“He had an election against their star, who followed me after the State of the Union address. I didn’t think she was great. But, she’s their star.” The President said.

Then, President Trump threw down the gauntlet. (Video Below)

“And who showed up? Oprah Winfrey, Michelle Obama, and President Obama.” He said.

President Trump continued, “And they campaigned for her, and they worked so hard. And all our men had was Trump.”

“And we kicked their ass!” He declared. (Video Below)

Obama previously endorsed Abrams, as did former President Jimmy Carter and Vice President Joe Biden and campaigned for her days before the midterms at the Forbes Arena at Morehouse College in Atlanta, GA.

Obama also campaigned for Andrew Gillum and former Sen. Bill Nelson in Miami, FL where they both lost as well.

(Related: CPAC Crowd Erupts In A ‘Lock Her Up Chant’ As Trump Goes Off Script In A Double Smackdown)