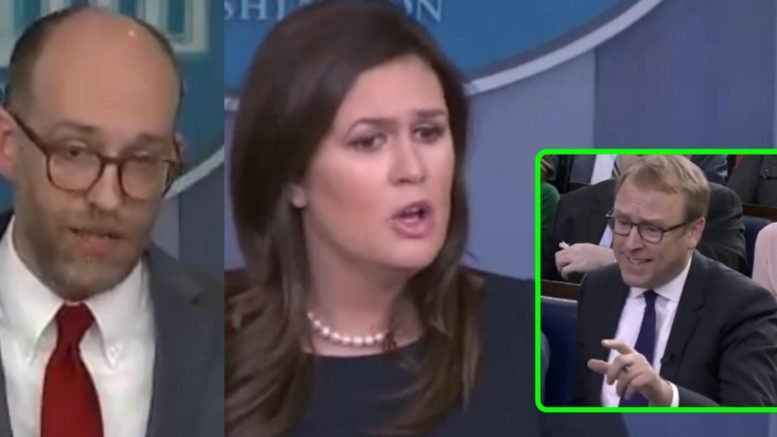 Before Sanders stepped to the podium to knock down the crooked and bias hack reporters, Acting Director of the Office of Management and Budget, Russell Vought, showed the press he could do the same. (Video Below)

The Trump administration released its budget proposal for its fiscal year 2020 on Monday, and Russell Vought explained how it cuts spending across the board.

When asked on Monday about President Donald Trump’s campaign promise to eliminate the national debt while in office, Vought punted a reporters question back to Congress and former President Barack Obama.

Vought also knocked the Obama administration for doubling the national debt and argued that President Trump came into office with “an economic recovery that was needed to put people back to work.

ABC News Chief White House Correspondent, Jonathan Karl, got schooled twice during the briefing. Once by the Budget Director and again by the White House press secretary. (Video Below)

“During the campaign, [Trump] also said he would eliminate the national debt within eight years. And as you know, the debt within his first year was at 20 trillion, last year it went to 21 trillion, last month 22 trillion. So what happened to that promise? The President has added historically to the national debt, instead of keeping a promise to actually pay it off.” Karl asked Vought.

“Look, the last administration nearly doubled the national debt, and when this President ran for office, he made a commitment to the American people that he would attempt to tackle the debt within eight years.” Vought noted that Trump has done that in his first year and on.

“Congress has been ignoring the President’s spending reduction for the last two years. It’s only now, in our third budget, that they’re willing to have a conservation about the national debt.” Vought revealed “We’ve been trying to have it since we got to office.” (Video Below)

Next, Jonathan Karl asked Sarah about the President’s comments over the weekend where he took a swipe at Democrats and said they are becoming an “anti-Israel” and “anti-Jewish” party. This comes after the House passed a resolution that related to bigotry without directly condemning Rep. Omar for her anti-Semitic remarks.

“Sarah, the President said Democrats hate Jewish people, according to recent report. We’ve also seen him tweet in the last couple of days that the Democrats are the ‘anti-Jewish party’. Does the President really believe that the President hates Jews?” Karl asked.

Sarah explained that the President has been an unwavering and committed ally to Israel and the Jewish people.

“Frankly, the remarks that have been made by a number of Democrats and failed to be called out by Democrat leadership is frankly, abhorrent. And, it’s sad; it’s something that should be called by name. It shouldn’t be put in a watered down resolution.”

She also pointed that she speaks on behalf of the President on a number of topics and has condemned several acts. Sarah further advised him to go back to those comments. (Video Below)

Asked about national debt, OMB Acting Director Russel Vought tells @jonkarl, "Congress has been ignoring the president's spending reduction for the last two years. It's only now, in our third budget, that they're willing to have a conservation about the national debt." pic.twitter.com/Ny9TZapAQg