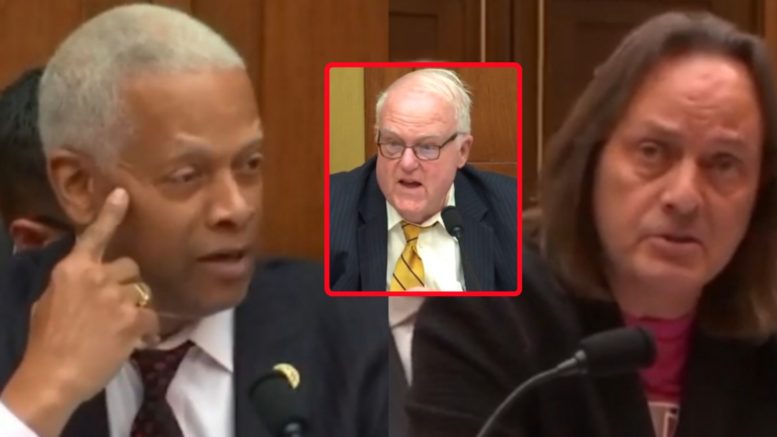 On Tuesday, Democrat Congressman Hank Johnson attempted to make T-Mobile CEO John Legere look guilty for choosing to have his executives and himself stay at one of President Trump’s many hotels.

Legere was called to face the House Judiciary subcommittee after it was found that he and nine of his executives stayed in Trump’s hotel located in Washington, D.C. around the time T-mobile announced plans to merge with Sprint in 2018.

Johnson kicked off his questioning of Legere by bringing up a hotel stay involving him and his nine executives the day after the merger with Sprint was announced.

Legere responded by saying his team simply came to D.C. to answer questions from the DOJ and FCC and to announce earnings.

While being pressed more on the Trump hotel stay, Legere replied, “I made the decision. I’m a long time Trump Hotel stayer way before this transaction. For example, ten years I have stayed…”

Johnson cut him off before he could finish and mentioned T-Mobile only booked rooms at that particular hotel twice before the stay in question. Legere quickly fired back and informed Johnson that the hotel had only been opened for one year prior. So, yes, they booked rooms there only twice before as there was no need to stay there more than that. Video Below

Johnson then claimed that T-Mobile spent $195,000 at Trump’s D.C. hotel in the 11 months after the merger was announced. Legere agreed, however, he mentioned that amount equates to just 10% of the companies “spend” in Washington for the time they’ve traveled there.

Johnson claimed the “optics” of the expenditures look as if T-Mobile is trying to “curry favor with the White House” and “gain acceptance from President Trump and his administration.”

Legere fired back by saying the FCC and DOJ are the ones who will ultimately judge the merger, not the President. He added, “The optics of me staying at the Trump Hotel haven’t changed in 10 years.”

Johnson then went as far as to say this all “doesn’t pass the smell test” and suggested Legere is trying to “purchase influence” and may have violated the Constitution.

As Johnson’s time ran out, Republican Rep. Sensenbrenner slammed the comments that were made by his colleague, and stated that wherever Legere decided to stay has no bearing on the result of the merger.

He said, “I’m kind of embarrassed sitting here, listening to the gentlemen from Georgia’s line of questions, particularly because the FCC is an independent agency. It is not part of the Administration and the commissioners are supposed to act independently.” Video Below