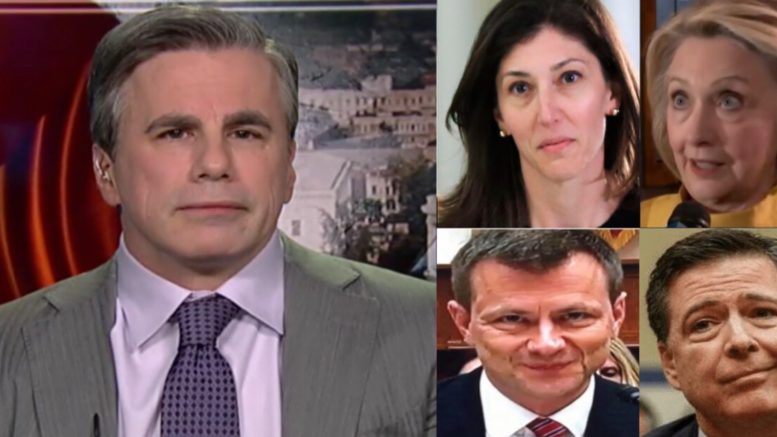 Congressman Doug Collins (R-GA) released 370 pages of Page’s transcript testimony Tuesday on his own volition, and promised that he would release even more in the future. (Video Below)

Rep. Collins, the top Republican on the House Judiciary Committee, published links to the transcripts on his congressional website after reading a link to the documents into the public record during a speech on the House floor. Page testified over the course of two days, July 13, 2018 and July 16, 2018.

Page left the FBI on May 4, 2018 amid a brewing scandal over her text messages with Strzok, the former deputy chief of the FBI’s counterintelligence division. Page and Strzok were part of a small group at the FBI that worked on “Crossfire Hurricane,” the code name for the bureau’s counterintelligence probe of the Trump campaign, per Daily Caller.

Tom Fitton said after the Lisa Page’s transcript dropped, “it just confirms you had these key FBI officials who were bending over backwards to protect Hillary Clinton by having this cramped view of the law and only investigating her for the mishandling of classified information.” [Emphasized] (Video Below)

Fitton further noted that all the text messages between Lisa Page and Peter Strzok confirm what they said. “They didn’t like Donald Trump, they meant it.”

Lisa Page had said, “Just because we believed that, didn’t mean it impacted our handling of the Russia investigation targeting him.” (Video Below)

Fitton fired back, “I don’t think anyone really believes that. And, it shows the Russia investigation has been irredeemably compromised and needs to be shut down, because Mueller relied on these two to get him up and running. And then, [Mueller] for four months, hid the fact that they had to be removed from his investigation because of this anti-Trump bias. [Emphasized]

Further, Fitton said there is no Russia collusion, and that there should not have been any appointment to begin with, referring to the Mueller investigation.

“But he’s still operating and it’s just outrageous. It looks like he’s budgeted through September. The question is: is Mueller’s operation ever going to end?” Fitton asked.

When asked if he thinks the Mueller report will be released soon, America’s Watchdog said, “I have no reason to believe anything is going to change. The partisans there are trying to get Trump and Mueller’s operation do not want to shut down. They are going to keep it going as long as they can.” (Video Below)

Fitton also weighed in on Adam Schiff, who has come under fire since it was revealed he met with Glenn Simpson in Colorado, and his staff met with Michael Cohen for 10 hours before his congressional hearing.

“You know there’s a rule in the House: you can’t act in a way to bring discredit upon the House. We’ve asked the Ethics committee whether those communications was an issue that deserves ethical attention.” He said.

When asked if Adam Schiff was part of the Fusion GPS dossier fiasco, Fitton replied, “I think if you look more deeply into Schiff’s relationship with Fusion GPS and Glenn Simpson, you’re going to find coordinations going on since the beginning and continuing.”

The Judicial Watch President also wants to know if Fusion GPS is still working with the Mueller operation and the Democrats in Congress.

He also pointed out that Glenn Simpson refused to answer questions relating to Fusion GPS and Hillary Clinton hiring him. (Video Below)