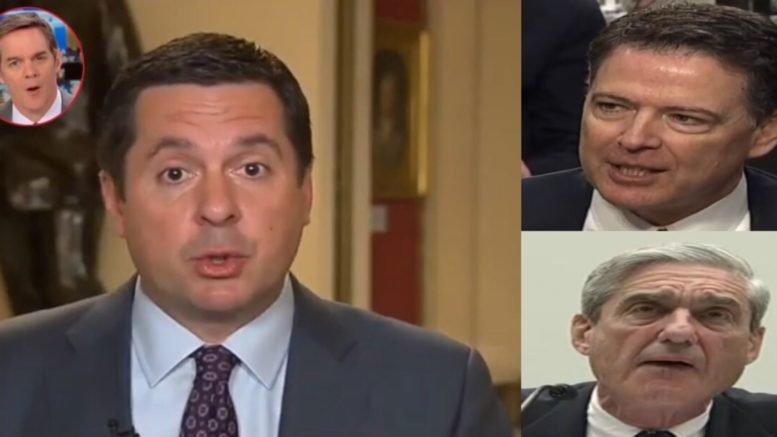 Nunes weighed in on the Steele deposition, former FBI lawyer Lisa Page, James Comey, and the Mueller investigation. (Video Below)

During the interview, Bill Hemmer announced that there are depositions set to be released today from Christopher Steele.

When asked why this this is significant, Nunes said, “Christopher Steele who was contracted by the Clinton campaign to go talk to Russians… we don’t know what Russians he ever talked to. We tried to get him to come and talk to the House Intelligence Committee, he refused. However, he was sued, so there was a deposition that was done.”

Nunes added, “Thankfully, the courts have ordered that deposition to be released, so it could be the first time we actually see [if] Christopher actually talked to Russians. Did he write the entire dossier that was then used by the FBI to target the Trump campaign?” (Video Below)

Nunes explained that the Judge has ordered the deposition public after Christopher fought to have it sealed.

Asked about Lisa Page and Hillary Clinton, Nunes said, “There was an orchestrated conspiracy [in the [FBI] to insure [Hillary Clinton] was not prosecuted.

Former FBI Director, James Comey, let Clinton off the hook and told the public, “What I assure the American people is that this investigation was done completely, honestly, and independently– no outside influence of any kind was brought to bear.” (Video Below)

Nunes blasted Comey and said, “I’m not sure what credibility Comey has left. He went out and sold a book. This guy brought tremendous disgrace upon the FBI.”

Hemmer mentioned Sen. Lindsey Graham who asked during an interview with Sean Hannity on Wednesday night that pertained to the “insurance policy” in Lisa Page and Peter Strzok’s text messages.

“Did they start the Russia investigation into Trump as an insurance policy in case he did win?” Graham asked.

(Related: Graham Gives His Theory On Why Obama’s DOJ May Have ‘Short-Circuited’ Hillary’s Email Probe)

Hemmer wanted to know if Attorney General Bill Barr or Robert Mueller is “wrestling with this?” Further, if Barr and Mueller are trying to figure out what is legit, illegal and what do they tell the American people?

Nunes fired off, “At this point the Mueller investigation went off the rails along time ago. They have zero credibility. They have been looking for two years. They have no evidence of collusion and this would not be complicated to find collusion. Remember that was the whole story, we were going to find evidence of Trump colluding with Russians to get dirt on Hillary?” (Video Below)

He also pointed out it wouldn’t take long to get people’s emails, cell phone calls, landline calls, or bank records. “This is something that could take a month for the FBI to actually go and do, but instead, this has gone on for two years. This is some kind of joke! 50 million dollars of taxpayer money has been spent, so the Mueller thing is off the rails.” He declared.