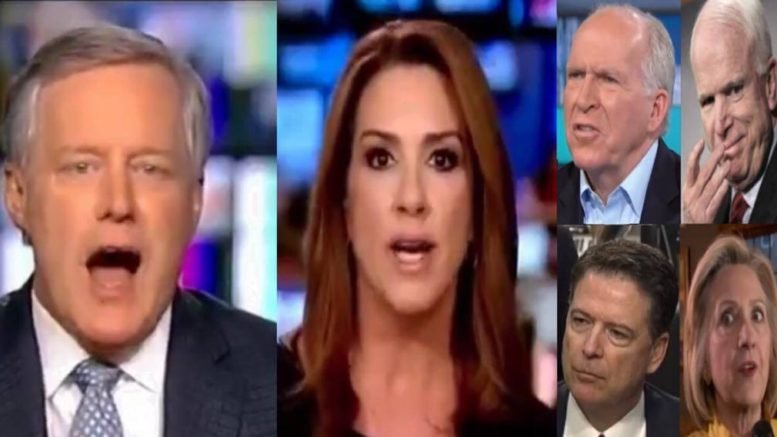 Further, investigative journalist Sara Carter and legal analyst Gregg Jarrett suggested a second special counsel should be started to investigate the matter deep within the swamp. (Video Below)

While discussing upcoming information to be released, Rep. Meadows pointed out that Hillary Clinton got a pass and there was a coordinated effort to to bring down President Trump.

Meadows further noted that Andrew McCabe and Robert Mueller wanted a job with the President. “The minute they they didn’t get, they started investigating. It’s time we start holding people accountable in Washington, D.C.”

When asked about the media peddling the fake dossier and the Trump smears, Sara Carter said, “This was a classic disinformation intelligence operation.” She added, “The FBI and DOJ targeted the President of the United States and they also targeted the Trump campaign.”

“I don’t understand how this cannot be one of the biggest stories in modern political history! And how Robert Mueller did not include that in his mandate is beyond me. But the most important thing is that William Barr, the new Attorney General, and others inside the DOJ, have to launch a full fledged investigation. And if not, open up a second special counsel to investigate everyone. This is one of the biggest political stories of our lifetime!” Carter declared. (Video Below)

Carter added that the FBI and DOJ wanted to solidify the information and went to David Kramer, who was Sen. John McCain’s aide.

Speaking about the two-tiered justice system, Gregg Jarrett explained that if the Hillary Clinton investigation was rigged in her favor for political purposes, “that’s obstruction of justice,” he said. (Video Below)

“Intentionally using a falsified document presented to a judge to obtain a warrant, that’s also obstruction of justice, and five other crimes including deprivation of rights under law.” Jarrett added, “There needs to be a legitimate investigation by either William Barr or by a special counsel, as Lindsey Graham as advocated.”

But the most interesting part of the conversation came when Meadows dropped a bomb shell.

“It’s additional information that is coming out that will show not only was there no collusion, but there was a coordinated effort to take this President down. We talk about the ‘Deep State.’ There are players now, even ambassadors, that are sitting ambassadors that were involved in part of this with the FBI-DOJ.” He said. [Emphasized]

The North Carolina congressman continued, “As we look at this, it’s time to show that we show the American people what’s out there, declassify some of those documents. I think when the American people see what I’ve seen, they will judge for themselves and know that this has all been a hoax.” (Video Below)