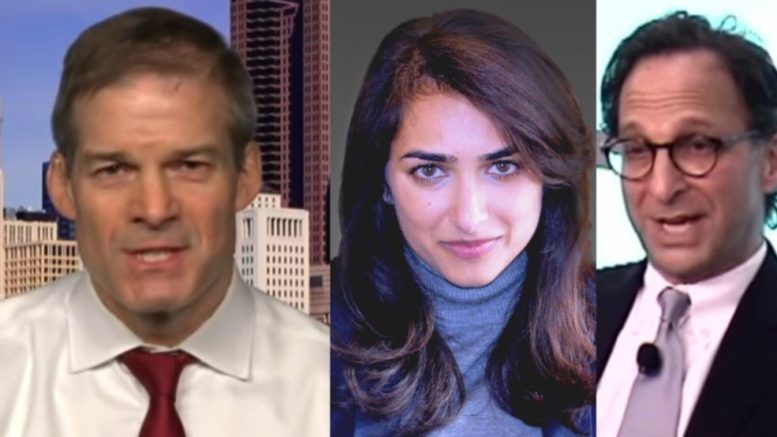 Jordan weighed in on the recent news of the departures of prosecutors from Robert Mueller’s team. (Video Below)

Zainab Ahmad, the last prosecutor to have worked on General Michael Flynn’s case is reportedly leaving the Special Counsel’s Office making this the second departure announcement this month and raising speculations that the Russia probe will soon be wrapped up.

Zainab Ahmad, a U.S. attorney in the Eastern District of New York who worked extensively on counterterrorism cases, was one of the prosecutors who signed former National Security Adviser Michael Flynn’s guilty plea for lying to the FBI concerning his contacts with a Russian official, reports Fox News.

The prosecutor’s departure came just a week after it was confirmed that Deputy Special Counsel Andrew Weissmann is planning to leave Mueller’s team “in the near future” and expected to work at the New York University School of Law. Weissmann helped to build the case against former Trump campaign chairman Paul Manafort, per Fox News.

Congressman Jim Jordan speculated why the two senior members are leaving and pointed out the letter he and Rep. Mark Meadows (R-NC) sent to to Attorney General William Barr pertaining to the actions and knowledge Weissmann and Ahmad had about the Steele Dossier in 2016. (Video Below)

Jordan said the reason Ahmad could have left is that the Mueller report is coming soon. “We all kind of suspect it is, but it also might be the letter that Mr. Meadows and I sent to Attorney General Barr, just 19 days ago, on March 1st.”

Their letter can be read here: Men On A Mission: Meadows & Jordan Target Mueller’s Team In Their Latest Letter To Barr

“We sent a letter pointing out that Andrew Weissman, who’s also leaving the Special Counsel, and Ms. Ahmad, met with Bruce Ohr prior to the 2016 election.” He said. (Video Below)

“And, Mr. Ohr conveyed to them that Christopher Steele, the author of the dossier, had talked to him, and he was conveying that information to both of these individuals who went on Bob Mueller’s team that Mr. Steele was desperate to stop Trump. So, we pointed that out to Mr. Barr. Maybe that has something to do with them leaving as well, I don’t know.” Jordan continued.

When asked what the American people need to know specifically about this investigation, Jordan explained that in their letter he told Attorney General William Barr that Weissmann and Ahmad, prior to the election, knew that Christopher Steele had bias against the President.

“Desperate to stop Trump was the term Mr. Ohr told us in the deposition.” Jordan said of Christopher Steele. “He conveyed that to these ‘key people’ at the Justice Department, not only before the election Harris, but before they went to the FISA court the first time — to get the warrant to spy on the Trump campaign.”

(Related: Sidney Powell Exhibits Why Mueller’s Report Will Likely Be Unfair: ‘[Weissmann] Is A Master Manipulator Of The Media’)

He added that Weissmann and Ahmad knew that information and they didn’t give that information to the court when they went to get the warrant. That is problematic. “We think that’s a potential conflict.” (Video Below)

Jordan further said that “it could just be that the Mueller report is wrapping up,” but he noted that Weissmann is also leaving the Justice Department all together.