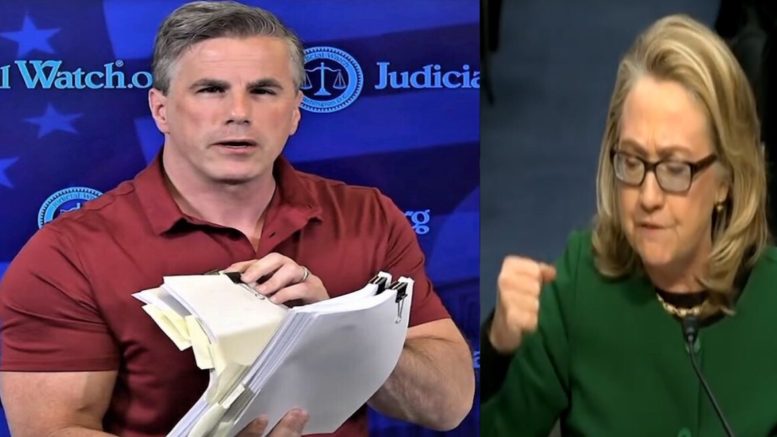 Judicial Watch is fighting for the American people and continues to do the heavy lifting exposing the truth.

On Thursday, Judicial Watch obtained newly uncovered emails that prove former Secretary of State, Hillary Clinton, aka (Crooked Hillary) tried to get rid of and bury.

In a new press release, Judicial Watch announced Thursday that they received 756 pages of newly uncovered emails that were among the materials former Secretary of State Hillary Clinton tried to delete or destroy, several of which were classified and were transmitted over her unsecure, non-“state.gov” email system.

Hillary Clinton repeatedly stated that the 55,000 pages of documents she turned over to the State Department in December 2014 included all of her work-related emails. In response to a court order in another Judicial Watch case, she declared under penalty of perjury in 2015 that she had “directed that all my emails on clintonemail.com in my custody that were or are potentially federal records be provided to the Department of State, and on information and belief, this has been done,” per JW’s press release.

Judicial Watch further states that in 2017, the FBI uncovered 72,000 pages of documents Clinton attempted to delete or did not otherwise disclose. Until the court intervened and established a new deadline, the State Department had been slow-walking the release of those documents at a rate that would have required Judicial Watch and the American people to wait until at least 2020 to see all the releasable Clinton material. The production of documents in this case is now concluded with the FBI being only able to recover or find approximately 5,000 of the 33,000 government emails Hillary Clinton took and tried to destroy. (Video Below)

Judicial Watch obtained the documents in response to a Freedom of Information Act (FOIA) lawsuit filed on May 6, 2015, after the State Department failed to respond to a March 4, 2015, FOIA request (Judicial Watch v. U.S. Department of State (No. 1:15-cv-00687)) seeking:

This final batch of Clinton emails includes five new classified emails and communications with controversial figures Lanny Davis and Sidney Blumenthal, according to JW. (Video Below)

President of Judicial Watch, Tom Fitton, explained, “Judicial Watch forced the FBI to turn over the records to us and it shows you that Hillary Clinton still has a lot to answer for– for her email misconduct. And, it is well past time for the Justice Department to get on the ball and do a serious and legitimate investigation.”

“We continue to uncover classified information mishandled by Hillary Clinton in emails that she tried to hide or destroy. This is further evidence of the urgency for the DOJ to finally undertake a complete and legitimate criminal investigation,” said Judicial Watch President Tom Fitton. “Attorney General Barr should immediately order a new investigation of the Hillary Clinton email scandal,” per JW press release.