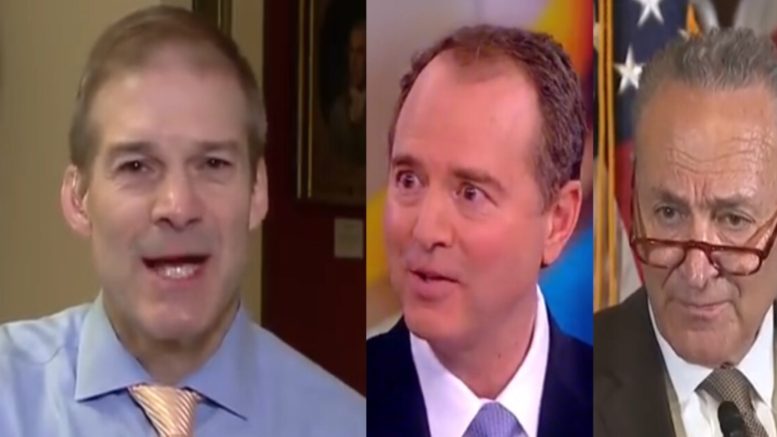 Rep. Jim Jordan (R-OH) joined Bill Hemmer on Fox News Wednesday where he weighed in on the Trump-Russia collusion aftermath.

This comes after the release of Attorney General William Barr’s summary of Special Counsel Robert Mueller’s investigation of finding no Russia collusion with President Trump or anyone associated with his campaign.

Rep. Adam Schiff (D-CA) still believes “undoubtedly there is still collusion” and plans to investigate the “counterintelligence issues.” He further claimed that President Trump or the people around him are compromised by a hostile power, adding that Mueller’s report doesn’t “look into that.”

Has Schiff seen the Mueller report in its entirety? If he claims to have evidence of collusion, why didn’t it give that information to Robert Mueller?

Rep. Jordan asked of Schiff, “Come on! Did he not read Bill Barr’s letter? The Attorney General said there was absolutely no collusion. The Attorney General also points out in his letter that there were multiple opportunities for Trump campaign officials to work with Russians, but they didn’t do it.”

“So in other words, Russia dangled the forbidden fruit in front of people all the time, and they didn’t bite. I don’t know how Chairman Schiff can make that statement. There was absolutely no collusion.” He added. (Video Below)

“It could not be a stronger more definitive statement on this entire investigation than what the Attorney General made; total vindication for the President.” Jordan explained.

The subject moved to the Steele dossier, that will now be the center focus, as the roles are going to be reversed to expose how Democrats and the media played dirty. (Video Below)

“The scary thing is what Devin Nunes said: they took this document, dressed it all up.” Jordan added, “Paid for by the Clinton campaign, took it to the secret court to get the warrant, to go spy on the Trump campaign. That’s how this whole crazy thing started.”

(Related:  Swalwell Reveals His ‘Evidence’ To Back Up Why He Thinks Trump Is A Russian Agent: ‘I Think He Acts On Russia’s Behalf’)

President Trump was asked Tuesday while speaking with the press. “Do you think it reached the West Wing of the Obama White House?” President Trump, responded, “I don’t want to say that, but I think you know the answer.”

Jordan responded, “Here’s what I know: when it was President elect Trump, Chuck Schumer, one of the top Democrats in our government, back in January of 2017, said this: ‘when you mess with the intelligence community, they have six ways from Sunday at getting back at you.'”

Jordan expressed that Schumer’s statement is scary. “The intelligence community getting back at Trump, for what? Winning an election?” He asked.

“This kind of activity is never supposed to happen in this great country, but we know it did.” He added, “That’s why Devin Nunes, Mark Meadows, myself and others are committed to getting to the truth, so that it never happens again. (Video Below)

Rep. Jordan also tweeted on Wednesday “@SenSchumer on President-elect Trump in Jan. 2017: “You take on the intelligence community, they have six ways from Sunday at getting back at you.” What did he mean by that? Was the highest ranking Democrat in Congress suggesting the Intel community would target the President?”

.@SenSchumer on President-elect Trump in Jan. 2017:

“You take on the intelligence community, they have six ways from Sunday at getting back at you.”

What did he mean by that? Was the highest ranking Democrat in Congress suggesting the Intel community would target the President?