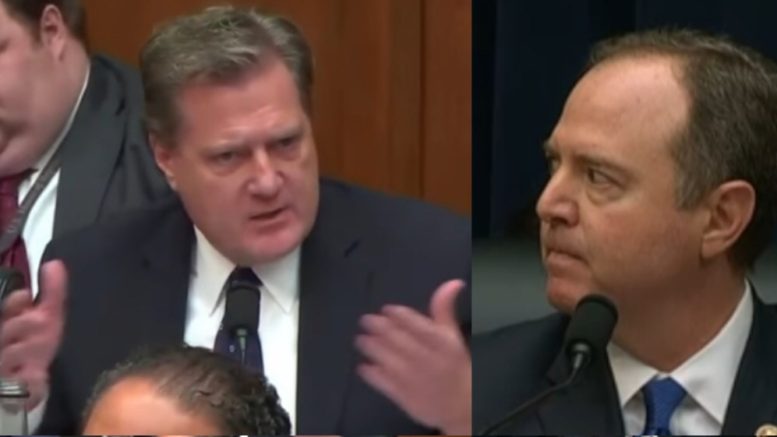 Republicans on the House Intelligence Committee demanded Rep. Adam Schiff (D-CA) to step down as chairman over his repeated claims to have “evidence” of Trump-Russia collusion.

Further, President Trump weighed in on Twitter with the same sentiment on Thursday morning writing, “Congressman Adam Schiff, who spent two years knowingly and unlawfully lying and leaking, should be forced to resign from Congress!”

The lawmaker’s letter comes after Special Counsel Robert Mueller’s conclusion turned up no evidence of collusion between Trump campaign members and Russia during the 2016 presidential election. (Video Below)

During the hearing, Rep Mike Turner (R-OH), explained to Schiff in clear detail why he should resign.

“Mr. Chairman, I am asking for your resignation today, because I believe you are advancing Putin’s work. I believe the chair has abused his power, his power in these processes, and I think he’s misrepresenting the information that we’ve received in classified sessions.” Turner began.

He further said “Now we have Schiff chasing after Russian collusion and those who would collude. Mr. chairman, in your opening statements, you attacked through McCarthy fashion, each and every one of us. You stated what we think. You can’t say what we think, it’s the lowest form of any argument to attack someone.” (Video Below)

“We have come forward and have said that we all think your leadership of this committee is compromised, in part, because you behave if your fellow members of this committee are your enemy. You behave as if the President is also, similarly, your enemy. And in true McCarthy fashion, you act as though you are the only one who is capable of protecting this nation and everyone else is a co-conspirator who have suspected intentions.” Turner fired off.

The Ohio Congressman also pointed that that Schiff has shown contempt for his fellow members of Congress for the last two years, attacking the members motives and their work. He also noted that Schiff has transformed the staff of the committee. “You’ve had this committee diverge from its goals, that is a danger to our national security. It is a distraction, it causes this committee not to function.” He stated.

“Mr. Chairman, your reactions today were in true McCarthyism as you chose to attack us, instead of state your commitment to national security.” Rep. Turner added.