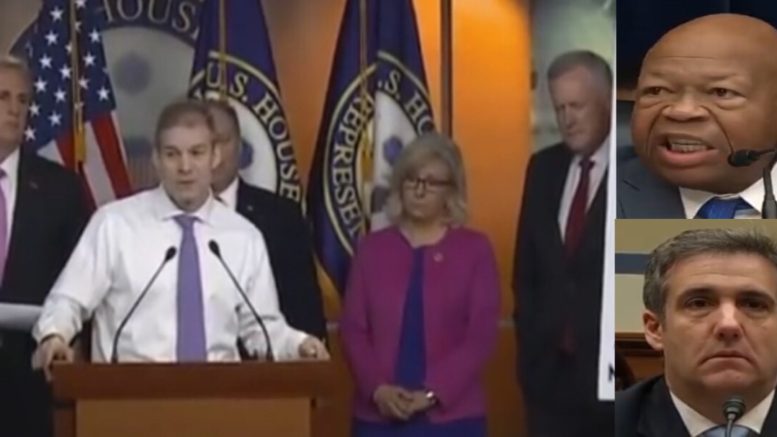 House Republicans held a press conference on Wednesday where they demanded that a transcript of former President Trump personal attorney Michael Cohen’s testimony before lawmakers be sent to the Department of Justice for a potential perjury investigation.

Republicans have been calling on Oversight and Reform Committee Chairman Elijah Cummings (D-MD) to take action, but as of today he has failed to do so.

Rep. Mark Green (R-TN) introduced a resolution on Wednesday directing Rep. Cummings to send a copy of the Michael Cohen’s transcript to the DOJ for review.

Republicans supporting the measure blasted Cummings for failing to live up to his promise to hold Cohen accountable after he lied under oath and misled the panel at least seven times when he testified in February.

“We’re making a simple request today that Democrats protect the integrity of the House of Representatives and refer Michael Cohen to the Department of Justice for perjury. Why is this controversial?” Rep. Green asked.

“Michael Cohen swore under oath to tell the truth before the House Oversight Committee, but he lied and multiple times. Ranking Member [Jim] Jordan [R-Ohio] and the rest of us warned the Democrats that we couldn’t trust a man who was going to jail for lying to Congress — that’s just common sense,” he said. (Continued Below)

Ranking Member of the House Oversight Committee, Rep. Jim Jordan (R-OH), said he doesn’t believe there is any disagreement between parties over whether Cohen lied to Congress. “I just think they’re not willing to do what they said they were going to do.” He said.

Further, House Majority Leader Kevin McCarthy (R-CA) blasted Democrats on the committee for failing to act upon referring Cohen to the DOJ, adding they should have been wary of bringing a witness in who was slated to go to prison for lying under oath.

“If you were not willing to stand up to someone who lied before your committee, you should not have told the American public that,” McCarthy fired off referring to Cummings. (Continued Below)

(Related: Cohen Offers Dems More Info On Trump In Exchange For No Jail, Meadows & Jordan Fire Back: ‘He’ll Say Or Do Anything’)

Chairman of the House Freedom Caucus, Rep. Mark Meadows (R-NC), pointed out that it’s critical to get members on the record on the issue. He said that lawmakers need to hold witnesses accountable to uphold the integrity of the panel.

“Hopefully, we will see the Democrats have come together in a bipartisan way to say that we will not allow a witness to come in here and lie and lie and admit, even by his own attorney’s admission, that perhaps the testimony he gave was not exactly the truth,” Meadows said.

“And and so we have this particular resolution that in two weeks will be having a vote on. And it will be up to Speaker [Nancy] Pelosi [D-Calif.] to decide on whether that’s going to be a bipartisan vote, standing up for this institution, or whether it will be exercised in a privileged manner to make sure that everyone goes on record,” Meadows added. (Video Below)

Mr. Chairman, do what you said you'd do and hold Mr. Cohen accountable for lying before our committee. https://t.co/DcFTxJha6N