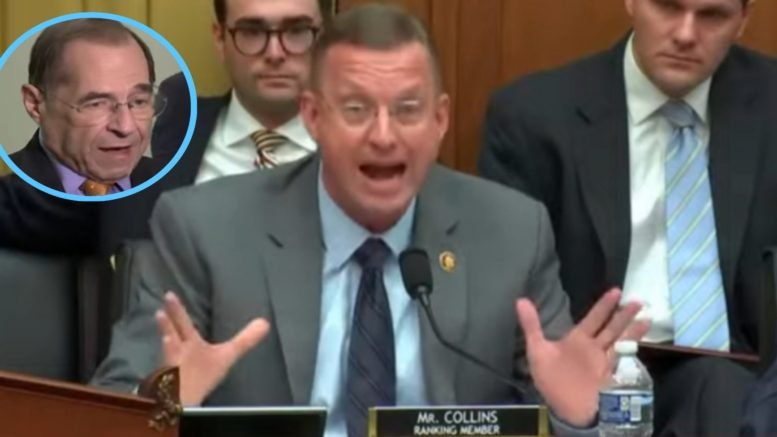 Ranking member of the committee, Doug Collins (R-GA) slammed Democrats during their meeting for wanting to use “staff” instead of committee members asking questions themselves.

Rep. Doug Collins began by ripping Democrats for essentially first praising Attorney General William Barr as a “top-notch” man, but after the Mueller report came out, their minds changed because they didn’t get what they wanted.

“At this point in time, now he’s a so-called Attorney General… but there are two reasons for this motion: The Chairman has decided, along with the majority, that they want to appear as if they’re doing impeachment. They want to have an impeachment- like inquiry because the precedent for staff questioning is impeachment,” Collins said.

“But the problem is, they can’t bring themselves to bring impeachment. They can’t bring themselves to take one of the resolutions that’s already been addressed on the Democratic side to bring it to this committee and open impeachment. If that’s what they want to do, open it up– we then go to separate battles and we begin this process.” He continued.

Collins noted that instead, Democrats want the “appearance of impeachment” to supply the base — to smear the president ahead of a 2020 election. (Continued Below)

Collins said that there is another area that bothers him, but first, he pointed out that members on the committee as he’s witnessed, have asked blistering questions of witnesses.”

He revealed that Democrats are trying to put staff members on at the end to try and “catch” the Attorney General on an answer that he can be asked about later. (Continued Below)

Collins went on to say whether you agree with the President or not, this is our chance [as Congress] to talk to the Attorney General about the Mueller report– “that all of us have talked about for two years.”

“Instead of putting poison pills in here, to say now we’re going to have a sideshow in here– right now Bill Barr is testifying before the Senate Judiciary Committee. [There’s] no theatrics, except questions about the report. Why is that so hard for us?” He asked.

” Number one: we want it to look like impeachment….. because [Democrats] don’t like the results,” Collins added of the Democrats.