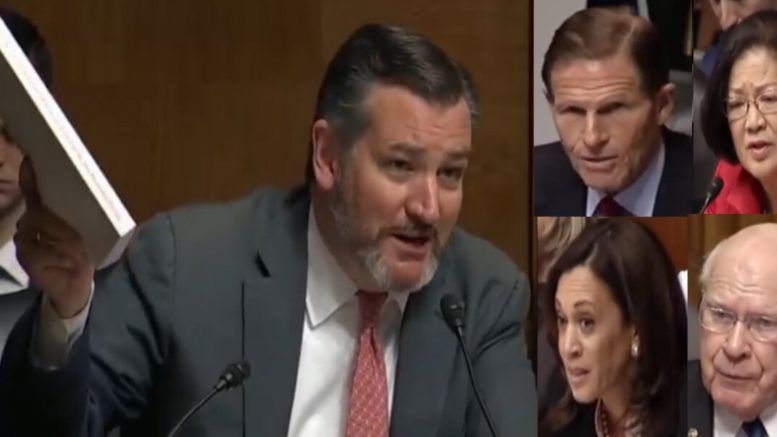 Attorney General William Barr testified on Capitol Hill Wednesday before the Senate Judiciary Committee in regards to the Mueller report.

Upon answering questions, Sen. Ted Cruz unleashed at the slanderous “Kavanaugh treatment” the Attorney General endured and subjected himself to from anti-Trump Democrat Senators.

“You’ve had an extraordinarily successful legal career, you didn’t have to take this job, and you step forward and answered the call yet again knowing full well that you would be subject to the kind of slanderous treatment, the Kavanaugh treatment, that we have seen of Senators impugning your integrity,” Cruz said.

“And I, for one, am grateful that you answered that call and are leading the Department of Justice both with integrity and fidelity to law. That is what the nation rightly expects of our attorney general. And I believe you are performing that very ably.” He continued.

He noted during the hearing before the Senate Judiciary Committee that was “quite revealing”: The word “Russia” that was used for 2 1/2 years from Democrat lawmakers, media, and journalists was not talked about during the hearing. Cruz also mentioned other extreme rhetoric Democrats used such as calling the President a “traitor”, wasn’t said either. (Continued Below)

“Instead, the principled attack have marshaled upon concerns this March 27th letter from Robert Mueller. And it’s an attack I want people to understand just how revealing it is. If this is their whole argument, they ain’t got nothing!” Cruz declared.

He described the details of Barr releasing his summary, then afterward Mueller’s team sent Barr a letter asking to release 19 pages to “not confuse the media.” Cruz went on to say that two weeks later, Barr instead, released 448 pages, the entire report, which includes the “19 pages”, yet Democrats are upset.

“So their entire argument is General Barr– you suppressed the 19 pages that are entirely public that we have, that we can read, that they know every word of it… and their complaint is that it was delayed a few weeks?” He asked while mocking Democrats. “If that is their argument, I have to say that is an exceptionally weak argument.” (Continued Below)

While holding up the entire Mueller report in the air, Sen. Cruz sarcastically pointed out that if Barr is hiding something, he’s doing a lousy job of it, because the “thing” Democrats are accusing Barr of hiding, he in fact, released to Congress and the America people.

“If anyone wants to know what are in those 19 pages that are being so breathlessly… ‘Oh, Bob Mueller said to release the 19 pages…’ you did. You did it a couple of weeks later. But we can read every word of the 19 pages, along with the full report.” He explained. “Oh, the calamity!”

Cruz switched gears and came right out to say, “I believe the Obama administration was profoundly politicized and was weaponized to go after political opponents of the President. If that is the case, would you agree that politicizing the Department of Justice and weaponizing it to go after your opponents… is it an abuse of power?”

Barr confirmed it’s an abuse of power, regardless of who does it.

Cruz went on to touch on the Trump campaign being “spied on”, and asked Barr to bring the same line of transparency he did with the Mueller report, but now, to go forward with the intent of finding out whether the Obama administration politicized the DOJ and targeted their political rivals by surveilling improperly.

Barr nodded in the affirmative. (Video Below)

Related: Sen. Graham Steps In After Hirono Orders AG Barr To Resign: ‘You Slandered This Man From Top To Bottom’)