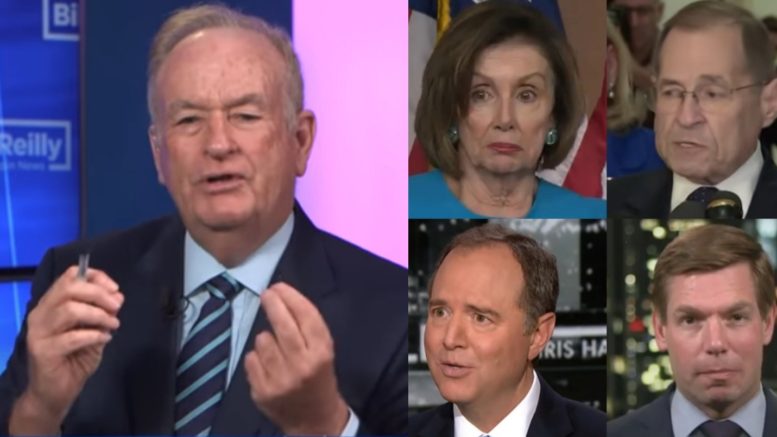 Bill O’Reilly appeared with Wayne Allyn Root of Newsmax TV and gave his take on some of the latest political news stories, including the massive amount of Democrat-led investigations into President Trump.

Wayne Allyn Root cited a report by NBC news that states there are currently over 80 seperate investigations into President Trump, which he labeled as ‘Investigation Mania’ per O’Reilly’s website.

Wayne speculates that Trump’s opposition is trying to “grind the White House down to the point it can’t operate anymore, and Trump can’t get anything done, and he loses for re-election.”

When asked by Wayne if refusing to comply with all subpoenas is the right approach that would work for Trump, O’Reilly replied, “That’s what I would do.”

He added, “You get to a point where the intent is known.” In this case, O’Reilly said Trump’s opposition is trying to “make it impossible to govern, wear him down emotionally and psychologically so he makes a mistake.” Video Below

O’Reilly then mentioned how many of the 80 investigations reported by NBC are state-based, primarily in New York and California.

With that known, O’Reilly declared that Anti-Trump forces are basically signaling they can’t win by impeachment.

And, since Mueller also let them down with his Russia probe findings, O’Reilly said Trump’s opposition strategy is to “just try to drive him crazy for two years and hope that all the chaos will make people vote against him.” Video Below