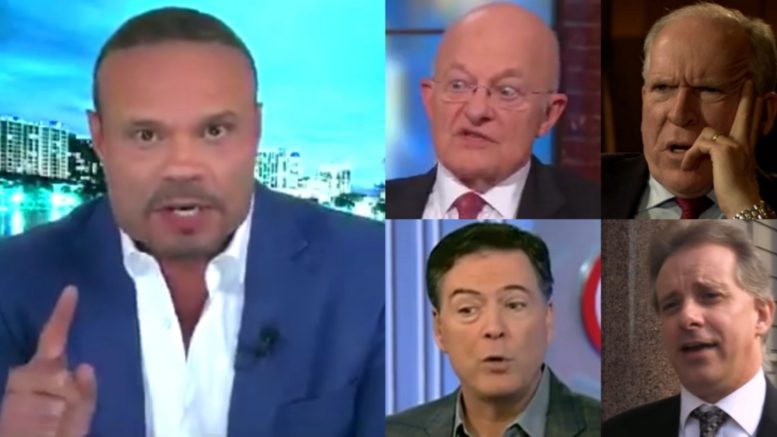 Dan Bongino joined Judge Jeanine Saturday night and discussed the topic of former Obama Administration officials, along with Christopher Steele, turning on each other in wake of Attorney General William Barr’s investigation into Russia probe origins.

Judge Jeanine began by asking Bongino if he thinks “rats are turning on each other.” Bongino replied, “Well, they should be right now because they’re all in trouble,” and he gave his reason behind it.

“It’s becoming obvious right now that there was a parallel construction scheme going on here,” Bongino continued. “Very simply, there were people in the upper echelons of the CIA, I believe were being marshaled by John Brennan, who were gathering information about Donald Trump.”

Bongino thinks the CIA then had to launder their information to make it look like they weren’t spying on an innocent American. And so he claims, “They laundered that information through Christopher Steele.”

That led to the latest revelation that 10 days before the FISA application, Steele told a State Department official that information in the dossier came from two Russian disinformation specialists “intimately linked” to Vladimir Putin.

Judge Jeanine brought up how Comey recently came out and accused Attorney General Barr of “sliming his own department.” She asked Bongino, “Shouldn’t Comey be afraid of Barr?” Bongino replied “Yes, well he is.” And he said that this is Comey’s own way of trying to cover for his “hubris at it’s worse.” Video Below

Bongino then declared, “Jim Comey is going to go down hard.” He cited that Comey signed the initial FISA application, despite knowing that information from Steele was unverified and that Steele himself was “unreliable.”

Steele went from telling the State Department official that a Cohen meeting happened in Prague, to then telling the FBI 8 days before the FISA application that he didn’t know where the meeting took place. Bongino said, “The FBI knew he (Steele) was unreliable.”

As a result, Judge Jeanine said people who were in the upper echelons of the intel community will be targeted by Bill Barr in his investigation. And so, this is why it makes sense that they’ll begin turning on each other if they haven’t already done so. Video Below