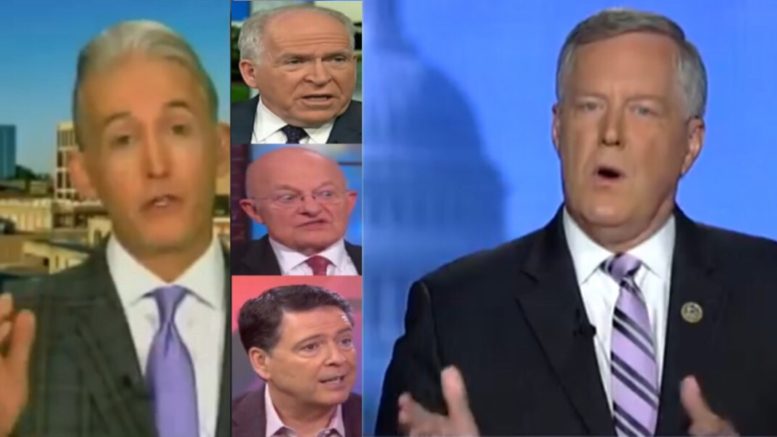 On Monday morning, Rep. Mark Meadows (R-NC), spoke with Brian Kilmeade, co-host of “Fox & Friends”, where he weighed in on important documents that are related to the origins of the counterintelligence investigation into President Trump’s campaign, which will be released soon.

Meadows responded to comments made by South Carolina Republican Congressman, Trey Gowdy, during an interview on “Sunday Morning Futures” with host Maria Bartiromo, in which Gowdy said that the FBI withheld “game-changing” FISA evidence regarding the origins of the Russia probe.

Rep. Mark Meadows said he agreed with Trey Gowdy that George Papadopoulos was being taped and recorded by FBI informants and that the unreleased transcript was never released to the FISA court.

(Related: Gowdy Drops A Dossier MOAB Exposing A Fifth Possible Way It Was Used To Spy: ‘Brennan, Clapper, Comey Know If It Was Used’)

Meadows explained during the interview, “[Gowdy] has seen documents that actually I have not seen. But we have come to the same conclusion and that is, indeed, George Papadopoulos was actually taped and recorded. And those interviews, there’s actually records of those.”

He suggested the documents would expose “exculpatory information” on the question of possible collusion between the Trump campaign and Russia. (Continued Below)

The North Carolina Congressman stated that he and Papadopoulos have discussed declassification, and when President Trump releases the records he noted, “The American people will be astonished to see not only was it going on and the President was right. He was actually taped and recorded but other than that, he was not colluding with the Russians and they knew this very early on. So that could be the game changer that Trey is referring to.”

“Before July 31, 2016, when the investigation opened, we know there were some improper activities going on and after. And I believe Attorney General Barr is very serious about getting to the bottom it,” Meadows said.

Asked about the delay on declassification, Meadows responded, “I think the delay is over. I think the President is serious. I’ve spoken to him recently and I think declassification is right around the corner and hopefully, the American people will be able to judge for themselves.” (Continued Below)

(Related: Mark Meadows Swipes Back At James Comey For Attacking AG Barr: ‘The Truth Will Soon Come Out’)