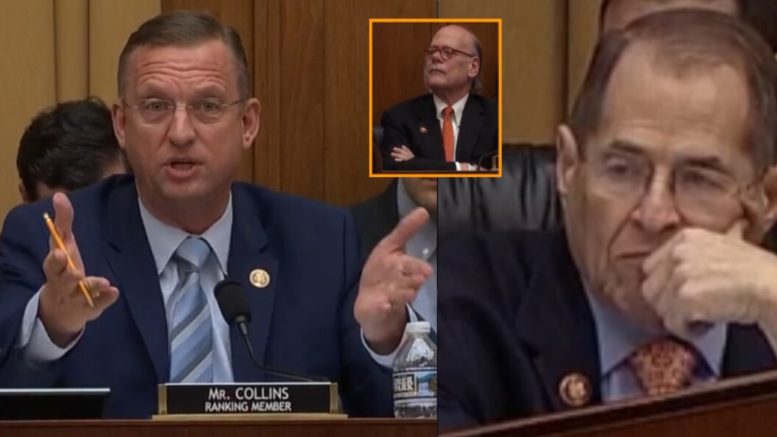 In yet another effort by Nadler to generate headlines and smear the President, Collins specifically called out Nadler for “wanting a fight but not the truth” and further accused Democrats of political theatrics, implying that they are “trying desperately to make something out of nothing.”

President Trump has directed former White House Counsel Don McGahn to skip a House Judiciary Committee hearing scheduled for Tuesday, citing a Justice Department opinion that he cannot be compelled to testify about his official duties — and, through his legal team, McGahn confirmed Monday evening that he won’t appear, reported Fox News.

In a letter to Nadler, McGahn attorney William Burck said his client won’t show up. Burck said current White House Counsel Pat Cipollone had communicated that Trump had instructed McGahn not to testify and that Assistant Attorney General for the Office of Legal Counsel Steven Engel had said McGahn was immune from testifying.

“Here we go again, the theater is open!” Rep. Collins declared in his opening statement, further announcing that Nadler actually read for the record from the Mueller report at the beginning of the hearing, but pointed out that the Chairman still hasn’t read the rest of the report that he’s been offered to read.

“But he left out one thing. He read from the Mueller report beautifully, did everything right. But he left out what he doesn’t want to have to come back to, and the frustrating thing that has brought us here again and again and again: the conclusions. There was no collusion. There was no obstruction charges. There’s nothing here!” Collins proclaimed. (Continued Below)

Collins went on to say, “It’s interesting, we’ll read in the quotes that make the headlines, but we’re not going to read in the bottom line of what was actually concluded. So, the Democrats are here trying again. The Mueller report concluded there was no collusion, no obstruction.”

“Because the report failed to provide damning information against the President, the majority claims we need to dig deeper. Deeper than the two years conducted by what is considered a prosecutorial dream team, because that probe ended without criminal charges against the President or his family. The Special Counsel closed up shop without giving the Democrats anything to deliver to their base. Now the Democrats are trying desperately to make something out of nothing,” Collins continued.

He explained how things are now becoming a pattern in reference to Chairman issuing subpoenas. “Instead of inviting the witness to testify voluntarily, and working with McGahn’s counsel to find a mutual agreeable time and scope for the testimony, the Chairman rushed to maximize headlines by issuing a subpoena,” Collins said. “That subpoena was the third in just four months, more subpoenas than the prior Chairman issued in six years.” (Continued Below)

Collins said that Nadler could’ve invited the witness to testify behind closed doors, but suggested that would have been “politically expedient and the show would not have been that exciting.” He added that a closed-door hearing conversation would not have “generated headlines” or theatrics.

“The cameras love a spectacle and when the majority loves a chance to run against the administration. I just am glad today to see that we don’t have a chicken on the dais! The Chairman orchestrated today’s confrontation when he could have avoided it because he’s more interested in the fight than fact-finding,” The Georgia Congressman explained.

“But, you know what’s interesting to me: we’ve subpoenaed the documents, we’ve subpoenaed that we want underlying documents, subpoenas for things we can’t get. But you know the one thing that we seem to avoid? Mr. Mueller himself… the one who wrote it. We’ve asked since April about Mr. Mueller coming, but every time we seem to get closer to Mueller, it just gets pushed on a little bit. Haven’t seen a subpoena here. Just think about that. You wanted the work of the author, but you don’t want to talk to the author,” he noted.

Collins also called out Nadler, who claimed in his opening, that “subpoenas aren’t optional.” The ranking member asked, “Well, we’ve found out a lot about subpoenas over the last month or so. I found out subpoenas maybe now aren’t optional, let’s add to the list. Subpoenas are also a discussion starter. A subpoena is to give us a better understanding in court. Not my quotes, the Chairman’s quotes. So what is it?”

“Don’t cut Congressional oversight because you can’t wait!” He pushed back at Chairman Nadler for his obsessive overreach. (Video Below)

(Related: Collins SLAMS Nadler Over His Move To Hold Barr In Contempt: ‘Mr. Chairman, It Did Not Have To Be This Way’)