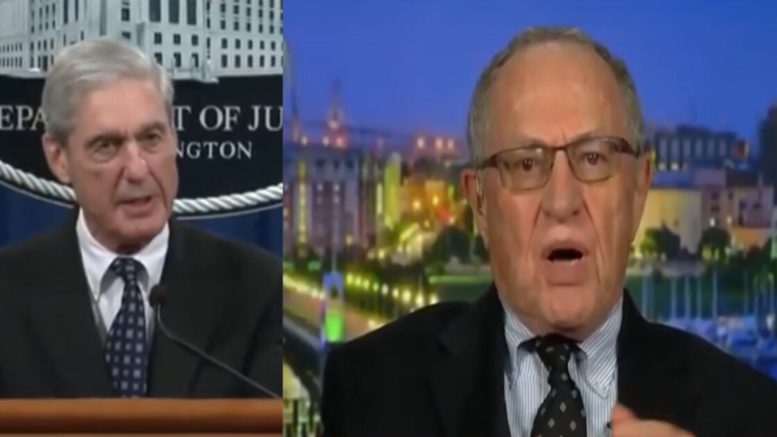 On Wednesday, Special Counsel Robert Mueller spoke publicly during a press conference where he officially concluded his two-year-long investigation into allegations of Russian collusion during 2016 election. Further, he closed his office and retired from the Department of Justice.

Robert Mueller “put his elbow on the scale” and his decision to do so was “much worse” than what then-FBI Director James Comey did in 2016, Alan Dershowitz said.

Dershowitz took issue with Mueller after he stated during his press conference that “if we had had confidence that the President clearly did not commit a crime, we would have said so” in his report.

“That was absolutely inappropriate for him to say. It was worse than anything Comey said when he exonerated Hillary Clinton and then said, but she engaged in extremely careless conduct,” he stated.

Dershowitz pointed out that Comey was “condemned” for his July 2016 announcement about the Clinton email probe and “helping the Democrats” was Mueller’s only possible motive” for his appearance Wednesday morning. (Continued Below)

Dershowitz continued that Mueller’s decision to emphasize the possibility that President Trump committed a crime “went well beyond his authority as special counsel.”

“A special counsel was a terrible, terrible mistake and I think Mueller’s statement today proves that beyond any doubt,” he said.

Dershowitz repeated his belief that a “nonpartisan investigative commission” should have been tasked with examining Russian election interference in 2016 and recommending steps to combat future interference. (Video Below)

(Related: O’Reilly Explodes On Mueller’s ‘Unfair’ Press Briefing: ‘He Wants The Swamp To Like Him’)