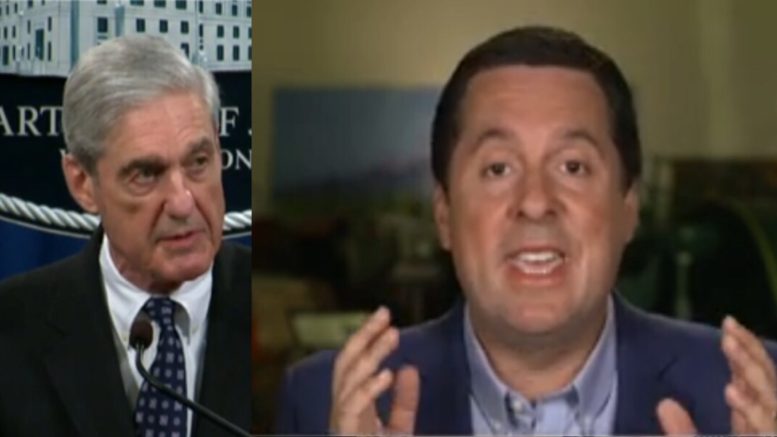 Nunes didn’t hold back as he exposed Mueller for the fraud he is and exactly what he was up to.

He also noted that observers of Mueller’s public remarks likely asked themselves why he held the press briefing.

“You just have to ask yourself, sitting back thinking about it: What was that press conference all about yesterday?” Nunes asked. “To light the fuse for impeachment, because these guys are in big trouble. We still don’t even know what Mueller was supposed to be investigating. We don’t have that document.”

Nunes said Mueller should have ended his Russia investigation many months sooner than he did. “We know that he’s talked about conspiracy to collude. Well, when he walked in the door, he knew there was no evidence of collusion,” Nunes explained. “He should have been done after day two. He has no Russians except for the Fusion [GPS] Russians and Clinton Russians and possibly the dirty cops at the FBI Russians. Those are the only Russians he has that show connections to the Trump campaign.” (Continued Below)

Nunes also asserted that Mueller tried to do a “victory lap” at his news conference by talking “about the Russians they found, the Russians they prosecuted,” while Nunes said he and his fellow Republicans on the House Intelligence Committee had the same information.

“Mueller tried to do this victory lap. He tried to talk about the Russian he found and the Russians they prosecuted. I just want to remind people, the House Republicans on the Intelligence Committee had that over a year ago. And Mueller, if he’s so concerned about these Russians, why did they obstruct our report from getting out?” Nunes asked. “Our report is still heavily redacted. The President can declassify that too.”

Nunes said that the Clinton operation was working heavily with Russians or Russian disinformation. “He didn’t take time to look into any of that,” he said. (Video Below)

(Related: O’Reilly Explodes On Mueller’s ‘Unfair’ Press Briefing: ‘He Wants The Swamp To Like Him’)