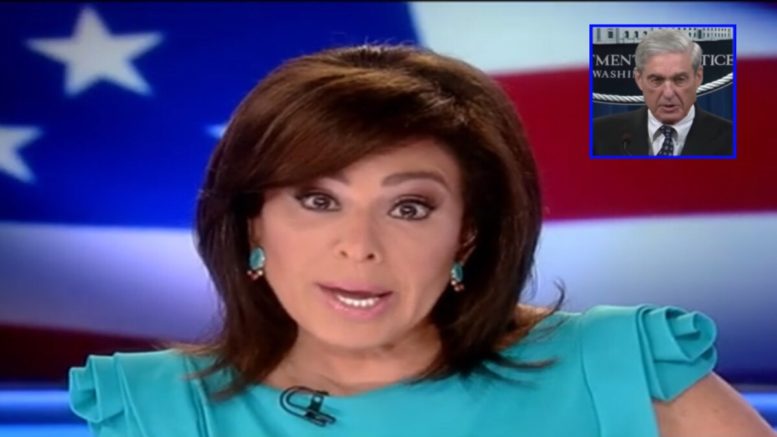 Saturday during her opening on Fox News’ “Justice With Judge Jeanine”, Judge Jeanine Pirro ripped into Special Counsel Robert Mueller after he gave a brief press conference on Wednesday, which has been perceived by Democrats and the media suggesting President Trump committed obstruction of justice during Mueller’s investigation.

But, Pirro believes Mueller is “more worried about his legacy” than he was protecting the country, and she explained why.

Judge Jeanine clarified by noting that Robert Mueller’s “stunt” is counter to everything he was taught and “supposedly” stood for. “It’s not only disappointing but politically damaging,” she began in her opening monologue.

“Mueller was charged with serving the United States of America, and not his ego. And yet, that is exactly how he will be remembered,” Pirro stated.

She broke it down: “Mueller had a case of ‘seller’s remorse’– when the seller regrets what he’s already sold. It seems Bob is already afflicted with a serious case of this remorse.”

Pirro said that the original report didn’t hurt President Trump enough the way the Democrats hoped it would. “Ask yourselves one question: Why after 10 weeks, after the Special Counsel report is submitted does Mueller unilaterally hold a press conference to say, ‘he’s closing shop’? And why does Mueller do a Jim Comey and say, ‘I didn’t charge, but only because…’ Why? He does it to rally the left because the Mueller report didn’t hurt enough,” she simplified. (Continued Below)

The Judge pointed out that the report is the investigation and there is nothing else to add to it, but expressed, “Not Robert Mueller! He decides to jump into the political fray, just like his pal Jim Comey did. Nothing has changed in the report. The only thing that has changed is Mueller deciding to create chaos and havoc.”

She noted Mueller did it to “muddy up the waters”, to charge up the left, and then played a clip of him during his press conference where he said, “If we had had confidence the President clearly did not commit a crime, we would have said so.”

Pirro explained that the Special Counsel “never” stated that in their report and added that it’s “sheer lunacy” what Mueller pulled. “I don’t know a prosecutor in this country who has ever said after a grand jury investigation, ‘I’m not sure he didn’t commit a crime.’ You either indict or you don’t,” she informed Mueller. (Continued Below)

The Judge switched gears to “collusion” between Mueller and the Democrats.

Pirro observed remarks from Attorney General William Barr to a Senate committee in which Barr said Mueller was still “formulating an explanation” as to why Mueller didn’t seek obstruction charges against Trump and suggested Mueller could have made that call.

“Still formulating an explanation as to why you didn’t reach a decision on obstruction?” Pirro asked. “Are you stupid? You had two years to think about that one. And he did not. Instead, he punted. And now Mueller wants to come out and say, ‘Look, we never said he didn’t. We simply couldn’t make a decision because he’s the sitting President. Folks, that’s baloney. What was the point of this investigation in the first place? What did you do for two years, Bob? You could have reached a conclusion without charging by simply stating your conclusion or your opinion.”

“And by the way, when did you know there was no collusion?” She wondered. “Did you know that before the midterms? You could have shut the whole thing down. But, then again, it was a major help to the Democrats, now wasn’t it? And you’re helping them yet again. So let’s recap: Neither the President or anyone on the Trump campaign colluded with Russia. You couldn’t make a decision on obstruction. And by law, the attorney general and deputy attorney general had to do so. So, who the hell asked you this week to come out and muddy the waters like Jim Comey did in 2016?”

Pirron concluded, “I guess we now have competition now between holier than thou Jim Comey and mixed up monsignor Mueller. Both members of the choir of ‘never-Trumpers’ in the church of the demon-rats, because that’s what this is all about. Nothing more, and nothing less.” (Video Below)