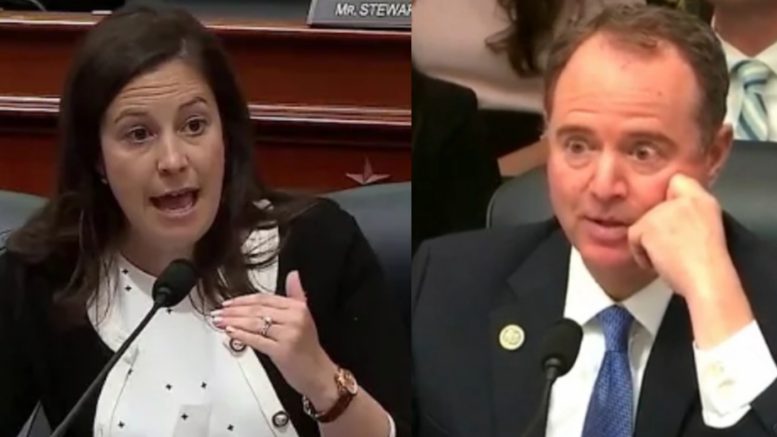 The situation unfolded while Stefanik recalled Comey’s March 2017 testimony.  She said that he disregarded briefing the Gang of Eight on the opening of the counterintelligence investigation into President Trump’s 2016 campaign.

Stefanik said to Schiff, “I hope you would agree, based upon the testimony of Director Comey that he circumvented the process in our oversight capacity.”

She then recommended that there should be a law to ensure that, in the future, intel agencies are required to brief Congress if a counterintelligence investigation is opened, such as one on a Presidential candidate.

Schiff replied, “I would say that was not his testimony.”

While Stefanik tried proving him wrong, Schiff interupted her and said, “And the representative is not accurate. But I can’t go into the timeline, but I can say that’s not accurate.” Video Below

With that said, Stefanik pleaded with the public to “go back to Director Comey’s testimony and follow the facts.”

She claimed his testimony shows that “he did not follow the proper protocols and procedures of briefing Congressional leadership on the opening of the counterintelligence investigation.”

Soon after, Stefanik uploaded footage of her spat with Schiff followed with video of the March 2017 testimony of Comey that proves she was right all along. See for yourself below.