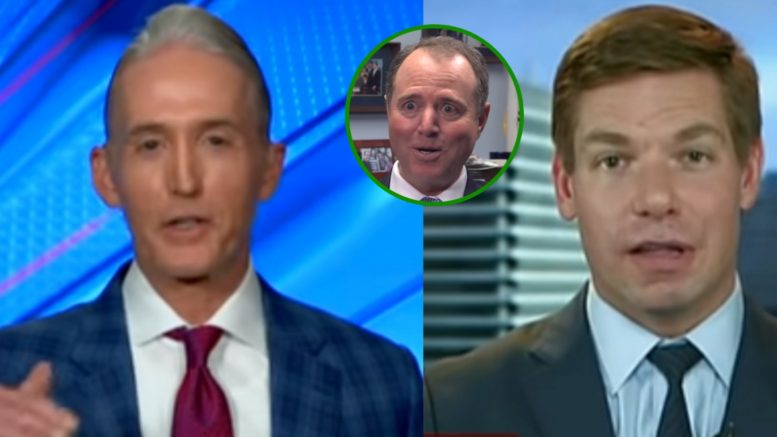 Democrat Rep. Eric Swalwell officially called for President Trump’s impeachment on Thursday after flirting with the idea for several months.

Swalwell decided to go all-in on the impeachment “bandwagon” after President Trump suggested that he may not let the FBI know if he was offered dirt on 2020 rivals from foreigners.

Swalwell said, “If you were even to give him the benefit of the doubt that it was a naive campaign, it was a businessman running for President, didn’t really mean it. It’s clear that he means it now.”

“That to me is a consciousness of guilt,” Swalwell continued. “Not just for impeachable offenses for what he’s doing now, in real time, but now it shows that the conduct during the last election was also one that was done with intent.”

He then declared impeachment can not wait any longer and “our democracy is at risk.”

Gowdy said, “I’m just trying to process– the democracy is at risk, so lets impeach a duly-elected President over a crime for which he was not indicted.”

He went on to mention that Swalwell is “not just jumping on the impeachment bandwagon — he helped build it”. Gowdy said that from day one, Swalwell and others have been trying to form a cloud over the President’s head, and they got it.

Trey concluded that Swalwell and Schiff have been “leading the impeachment train.” And “whether or not [Swalwell] formally called for it or not, his actions have indicated that he wanted Trump to not be President since the inauguration.” Video Below