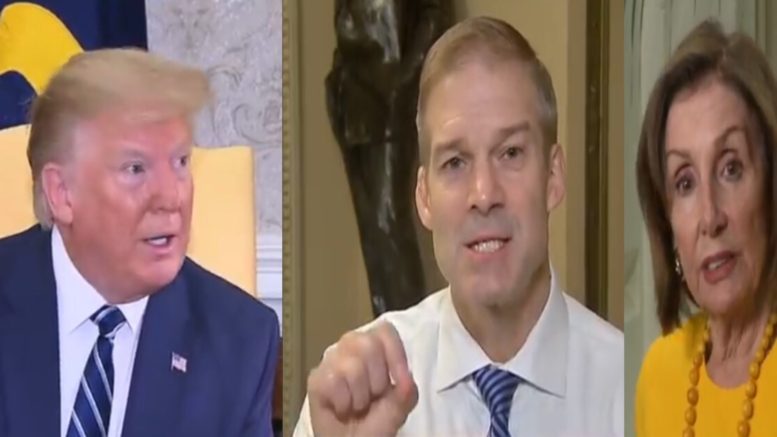 Congressman Jim Jordan (R-OH), on Thursday, spoke with “Fox and Friends” co-host Steve Doocy where he responded to President Trump’s comments about the GOP not being as aggressive with subpoenas as Democrats are.

This comes after the President spoke with host Sean Hannity Wednesday night during a segment of his show.

On Wednesday, President Trump said that House Speaker Nancy Pelosi (D-CA) hands out subpoenas like they are “cookies.”

Asked why he didn’t hand out more “cookies”, Rep. Jordan said, “We should’ve subpoenaed a few more people, I agree with the President 100%. But the fact is, we are where we are…”

Jordan explained that President Trump was falsely accused of collusion and asked, “Do you investigate the false accusation or do you continue to investigate something Bob Mueller spent 22 months investigating and came back and said there was nothing there?”

“Obviously, the Democrats have chosen the latter,” he continued. “They’re gonna keep, as the President said, they’re gonna keep subpoenaing people, they’re gonna keep doing these impeachment hearings– even though Bob Mueller spent 22 months, $30 million, 19 lawyers, 40 FBI agents, 500 witnesses, and 2800 subpoenas on an investigation he concluded there was nothing there.” (Continued Below)

Asked when he goes home to Ohio and talks to people, what does he get asked in reference to collusion, the Mueller report or impeachment, Rep. Jordan admitted, “You know the question I get asked all the time, and not just the district of Ohio, when I’m traveling to the airport or something, I get it all the time… ‘When is someone going to jail?‘” [Emphasized]

“Because the American people know that what took place when the upper echelon of the FBI, who had such a problem as Bill Barr as said– when they took one party’s opposition research document, dressed it all up, made it look like it was legitimate intelligence, took it to a secret court to get a warrant to spy on President Trump’s campaign… they said, ‘When is someone gonna be held accountable?’ And that’s the question I get from people all the time, and frankly, from all over the country,” Jordan explained.

“They want us to do what Bill Barr and John Durham are doing… getting to the bottom of how this whole crazy thing started,” he added. (Video Below)

Jordan also noted that the Attorney General said when he testified in front of the Senate that there was a failure at the upper echelon of the FBI, spying occurred, there’s a basis for his concern, and lastly, AG Barr said there was unauthorized surveillance and political surveillance.

(Related: Jordan Explains Why Dems Are Scrambling To Change The Narrative: ‘[Barr’s Investigation] Scares All These People’)

Congressman Jim Jordan also took to Twitter on Thursday and wrote, “When is someone going to jail?” It’s a question I get all the time. They want to know when someone will be held accountable for wrongfully spying on the Trump campaign. That’s why Bill Barr and John Durham’s investigation is so important.”

“When is someone going to jail?” It’s a question I get all the time.

They want to know when someone will be held accountable for wrongfully spying on the Trump campaign.

That’s why Bill Barr and John Durham’s investigation is so important.

(Related: Barr Hits Back At Dems As He Discloses More Details In His Search For Answers: ‘They May Be Concerned About Outcome Of A Review’)