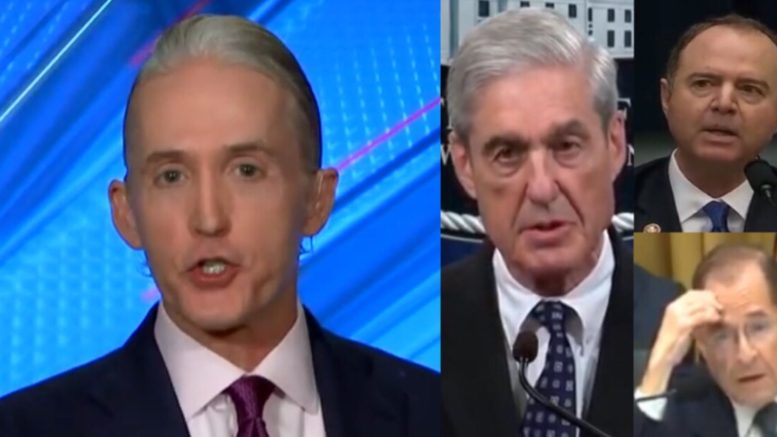 Former South Carolina Congressman Trey Gowdy doesn’t expect much to happen during next week’s hearing with former Special Counsel Robert Mueller, except as he put it: a “carnival and a freak show.”

Mueller is set to testify before the House Judiciary and House Intelligence committees July 17.

On Monday, Attorney General William Barr said in an interview that the Justice Department would support Robert Mueller if he decides he doesn’t want to subject himself to questioning from congressional Democrats. “It seems the only reason for doing that is to create some kind of public spectacle, and if Bob decides that he doesn’t want to be subjected to that, [then] the Department of Justice would certainly back him,” Barr explained.

Gowdy summarized why the media “loves” hearings like next Wednesday and used a March 2017 hearing featuring James Comey as an example.

“Think back to March of 2017 Sean when Devin Nunes had a public hearing… Jim Comey and Mike Rogers a hundred times– the witness said ‘I cannot answer that question in this forum.’ You would think the media would say that was a waste of everybody’s time, don’t ever do that again,” Gowdy told Hannity. (Continued Below)

“They love it. They love it because what Adam Schiff and Swalwell and the others did is read newspaper articles that contain classified information only for the witness that they have to say ‘I can’t comment on that in this setting.’ That’s what’s going to happen next week. Mueller’s report is out. He’s not gonna deviate from the four corners of that report. But that will not keep House Democrats from asking… the focus will be on the question, not the answer. Mark my word,” Gowdy continued.

Gowdy also believes that when Mueller is asked about the dossier he will say, “That’s not what Rod Rosenstein asked me to do. I did what the Acting DOJ AG asked me to do.” Gowdy clarified, “Which is go back to Rod’s memo: What did Russia do in 2016, and then a specific reference to the Trump campaign. I think that’s Mueller’s out– his out on ‘when did you know there was no collusion’ is gonna be: ‘When we interviewed the last witness,'” he said.

(Related: Trey Gowdy Discloses The Questions He Would Ask Mueller If Given The Opportunity)