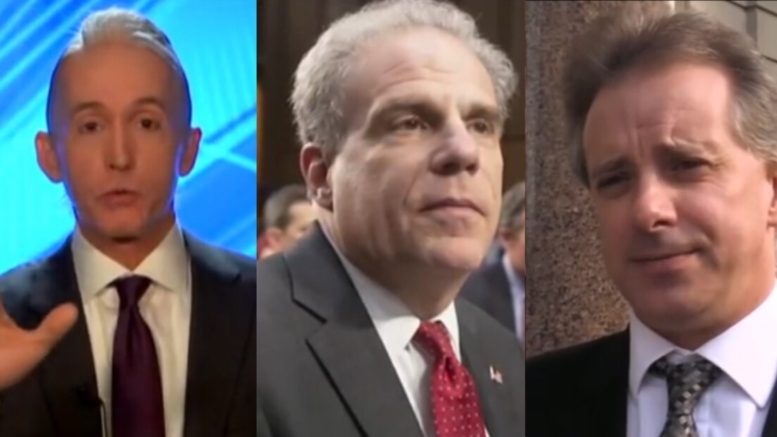 On Tuesday, Herridge could confirm that the key witness outside of the FBI and Justice Department who had agreed to talk with the Inspector General, Michael E. Horowitz is, in fact, the former British spy, Christopher Steele.

Christopher Steele, the former MI6 agent, who created the dirty, Clinton bought and paid for Russian dossier was grilled by federal prosecutors in the U.K. in June, that reportedly lasted over 15 hours and conducted by lawyers that were working for the DOJ’s Inspector General, Michael Horowitz.

Former South Carolina Congressman joined “Fox and Friends” Wednesday morning where he responded to the news of Steele and to the upcoming report from Horowitz on FISA abuses.

Asked if he was surprised that the Department Justice has finally interviewed Steele, Gowdy said he was “pleasantly surprised”, adding that, “the only way Michael Horowitz can issue the kind of report that he wants to issue that [we] would benefit from is to interview every single witness. I cannot imagine a more seminal witness that Christopher Steele.”

“So kudos to them for going to Europe and interviewing him, because they certainly couldn’t make him come here,” Gowdy said. (Continued Below)

Gowdy couldn’t confirm when the report would come out but said, “The good thing about Michael Horowitz is he’s happy to talk to anyone about timing, but he’s not gonna talk about substance. I’m not a member anymore, so I wouldn’t even ask him about timing. I’ve heard that it’s been delayed a little bit, in part, because of the new witnesses that have come forward, but also in part, because Horowitz is having to read this report in a skiff– in a secure room.”

“A lot of the report is going to be classified. We all wanted it yesterday, but I’m willing to postpone when I get it to have the most thorough accounting of what happened over that year in a half time period as possible,” he added.

Asked who else do we need to hear from, Gowdy responded, “I want to talk to anyone that can shed light on when the world’s premier, most powerful law enforcement agency decided to investigate a presidential campaign.” (Video Below)

(Related: Gowdy’s Prediction On Mueller Testifying: ‘The Hearing Next Week Will Be A Carnival; It Will Be A Freak Show’)