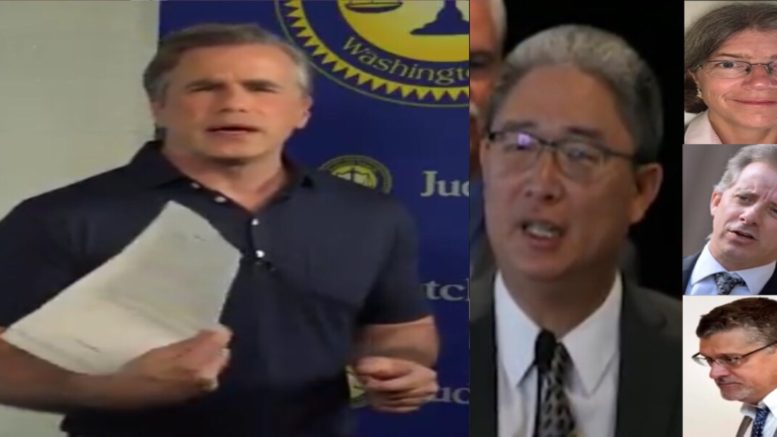 Ohr was demoted from his position as U.S. Associate Deputy Attorney General in December 2017, but shockingly, Judicial Watch uncovered that Ohr received a total of $42,520 in performance bonuses during the Trump/Russia investigation. Ohr’s bonus nearly doubled from $14,520 (received in November 2015) to $28,000 in November 2016.

According to Judicial Watch, on December 5, 2016, Bruce Ohr emailed himself an Excel spreadsheet, seemingly from his wife Nellie Ohr, titled “WhosWho19Sept2016.”

The spreadsheet purports to show relationship descriptions and “linkages” between Donald Trump, his family, and criminal figures, many of whom were Russians. This list of individuals allegedly “linked to Trump” include: a Russian involved in a “gangland killing;” an Uzbek mafia don; a former KGB officer suspected in the murder of Paul Tatum; a Russian who reportedly “buys up banks and pumps them dry”; a Russian money launderer for Sergei Magnitsky; a Turk accused of shipping oil for ISIS; a couple who lent their name to the Trump Institute, promoting its “get-rich-quick schemes”; a man who poured him a drink; and others, per JW’s press release.

JW further notes that on December 5, 2016, Bruce Ohr emails himself a document titled “Manafort Chronology,” another Nellie Ohr-Fusion GPS document, which details Paul Manafort’s travel and interactions with Russians and other officials.

Judicial Watch obtained the documents through a Freedom of Information Act lawsuit filed against the Justice Department after it failed to respond to a May 29, 2018, FOIA request. (Continued Below)

FBI interview reports from December 5 and December 12, and December 20, 2016, show that Bruce Ohr “voluntarily” gave these anti-Trump and Manafort materials, created for the Clinton campaign by Fusion GPS, to the FBI. (The FBI interview notes were just released to Judicial Watch last week.)

On January 25, 2017, Bruce Ohr’s wife, Nellie Ohr, forwarded text messages to him that she’d sent to her “colleagues,” where she refers to the Steele dossier as the “yellow rain dossier” and the “yellow showers dossier.” (Continued Below)

Fusion GPS hired Nellie Ohr, a Russia expert, in late 2015 to conduct research on various Trump associates, including members of his family. Beginning in summer 2016, Fusion GPS founder Glenn Simpson and dossier author Christopher Steele began corresponding with Bruce Ohr regarding their investigation of Trump. Steele, a former British spy, met with both Ohrs on July 30, 2016.

Fusion GPS was working at the time for the Clinton campaign and DNC.

After the 2016 election, Bruce Ohr would serve as a back channel between Steele and the FBI after the bureau cut ties with the former spy over his contacts with the press.

Four months prior to this exchange, Kavalec had found Christopher Steele not credible because of factual inaccuracies that he had relayed to her in October 2016, as uncovered by Judicial Watch.

On May 23, 2016, DOJ prosecutor Lisa Holtyn emails Bruce Ohr to see if he could connect her as well as prosecutors Joe Wheatley and Ivana Nizich with his wife, Nellie Ohr, as she could be a “great resource” for them. He replies, “I’m sure Nellie would be delighted to speak with them. I’m pretty sure there is no conflict of interest since they aren’t paying her or anything like that.” Congressman Mark Meadows suggested this email shows that Nellie Ohr “knowingly provided false testimony” to Congress she had no role in DOJ investigations.

“These documents show a crazed DOJ-FBI effort to use the Clinton spy ring at Fusion GPS, namely Nellie Ohr, to smear President Trump – even before he was sworn in as president,” said Judicial Watch President Tom Fitton. “Clinton campaign operative Nellie Ohr may as well as have had a desk at the Justice Department.”

Last week, Judicial Watch received of FBI 302 interviews with Bruce Ohr in response to a (FOIA) lawsuit filed after the Justice Department for failing to respond to an August 6, 2018, FOIA request seeking Form 302s for a number of interviews with Ohr concerning his interactions with Steele.

JW released 34 pages of “302” report material from FBI interviews with Bruce Ohr, who was removed from his position as U.S. Associate Deputy Attorney General in December 2017. The newly declassified documents were produced to Judicial Watch Thursday evening.