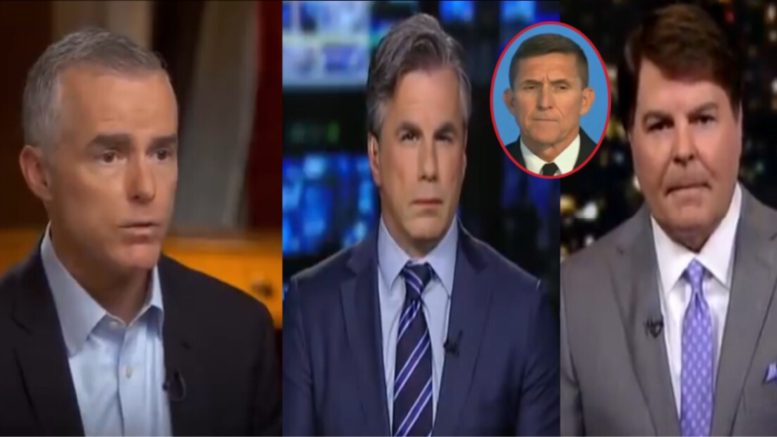 Fox News legal analyst, Gregg Jarrett, and President of Judicial Watch, Tom Fitton, joined host Sean Hannity on Fox News Tuesday where they weighed in on whether former FBI acting director Andrew McCabe should be criminally prosecuted for his role in the Russia investigation.

“Andrew McCabe is a guy who helped put people behind bars for ‘lying’, the same legal standard ought to apply to him if there’s any justice in our system of justice. This was a criminal referral by a neutral party, the Inspector General at the Department of Justice– who said he lied not once, but four times!” Gregg Jarrett expressed. [Emphasized]

Jarrett explained that McCabe said that he “never leaked information to the media– the Wall Street Journal,” but in fact, he did. “He said he had ‘no idea who authorized that leak,’ when in fact, he’s the one who authorized it. And then, he was allowed to correct the record and in a tape-recorded interview continued to spew his false denials,” Jarret said.

“If we’re going to apply an equal standard of justice and not selective prosecution based on politics, Andrew McCabe ought to be criminally prosecuted,” Jarrett recommended. [Emphasized]

According to Fox News, Benjamin Wittes, the editor-in-chief of Lawfare and someone former FBI director James Comey describes as a “good friend,” wrote a blog Tuesday that speculated that McCabe is likely to be charged. “Such meetings generally take place when indictment is imminent; they happen when the government plans to bring charges,” Wittes wrote. (Continued Below)

Tom Fitton weighed in on the prospect of indictments and a grand jury D.C.: “The idea that you ‘might’ have a democratic jury, I think, is just excuse-making. If that’s that standard than no democrat will ever be indicted for corruption here in Washington D.C. — was the excuse not to prosecute Hillary Clinton during White Water and it can’t be the excuse again because that’s a get out of jail free card for the Democratic liberal establishment that’s running this town even though Trump is President,” he said.

Fitton also said that he doesn’t understand “why you would wait for the big stuff while exonerating them or refusing to prosecute them for the little stuff. The response outta be that we’re considering this part of a broader investigation and we’re gonna defer our prosecution decisions until we have all the FISA material in– if indeed that’s the real reasoning here.”

He noted that Judicial Watch released documents last month about “14 leaks” that were exposed at the senior levels of the FBI and FBI special agents– yet, not one prosecution. “One of those leaks highlighted these documents that we received is the ‘McCabe leak.’ And the detail is ‘lack of candor under oath and lack of candor not under oath.’ Both, of which, would be crimes if any other American committed it, especially when you look at McCabe’s desire to go after [Michael] Flynn and ambush Flynn, with those FBI agents sent over with [Peter] Strzok,” Fitton explained. (Continued Below)

McCabe is accused of lying to federal agents and Fitton added, “It would be terribly disappointing to millions of Americans if the Justice Department, in addition to letting [James] Comey off, let McCabe off,” Jarrett said.

He took McCabe to task for his role in the Russia investigation and with General Michael Flynn.

“McCabe was instrumental in that because he was essentially… lying and deceiving and trying to entrap Michael Flynn to pursue the Russia hoax against Donald Trump,” Jarrett said.

The legal analyst called the career trajectory in the FBI for both McCabe and Comey “frightening.”

“These two guys or the symbol of malevolence and corruption. It should be frightening to all Americans that Comey and McCabe rose through the ranks to become Director of the FBI, both of them,” Jarrett said adding that he believes Flynn will withdraw his plea deal now that Sidney Powell is his defense attorney.

Fitton added that President Trump can “cut it all short” by pardoning Flynn. “If McCabe isn’t prosecuted, I’d pardon Flynn in a heartbeat, if I were him.” (Video Below)

(Related: Judge Jeanine Bursts Into Laughter, Then Sounds Off After McCabe Is Hired As CNN ‘Contributor’)