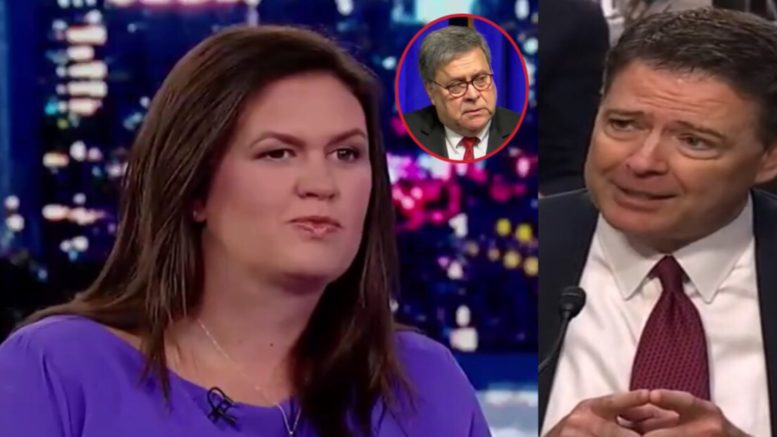 The IG report explains that Comey “violated standard procedures” during his time in the Trump administration; stating he set a “dangerous example” after leaking and that he set a dangerous example for the over 35,000 current FBI employees by not safeguarding sensitive information obtained during the course of his FBI employment.

“The Inspector General made it clear: there was lying and there was leaking, and yet the media is almost dead silent,” Judge Jeanine proclaimed.

“I think that just shows exactly what kind of bias is out there against the President,” Sanders expressed. “Let’s not forget, this is the third IG report to come out and show that Comey was a liar and a leaker– that he disgraced himself and did a total disservice to the FBI.”

Sanders noted that Democrats said the same thing about the former FBI Director up until the moment President Trump fired Comey. “They thought the same thing; only once the President made that move did they start to disagree with them,” Sanders said. (Continued Below)

Judge Jeanine stepped in and declared, “Jim Comey has to be indicted for what he did! He defrauded the FISA court.”

“Absolutely! And I think he is lucky he’s not already in prison!” Sanders said agreeing with the Judge. “We’ll see what happens. Again, I have total confidence in Bill Barr. I think he’s shown himself to be a real leader. I’m not going to get into what the exact punishment needs to look like, but there certainly should be consequences. And I think the American people want to see something happen.” [Emphasized]. (Video Below)

“This is the third IG report to come out and show that Comey was a liar and leaker that he disgraced himself and did a total disservice to the FBI. We are seeing more and more reasons as to why The President was right in firing James Comey. “ – @SarahHuckabee pic.twitter.com/6UUlY10ntP

(Related: Rep. Devin Nunes Reveals Why James Comey Could Still Face Charges: ‘He Was Involved In A Conspiracy’)