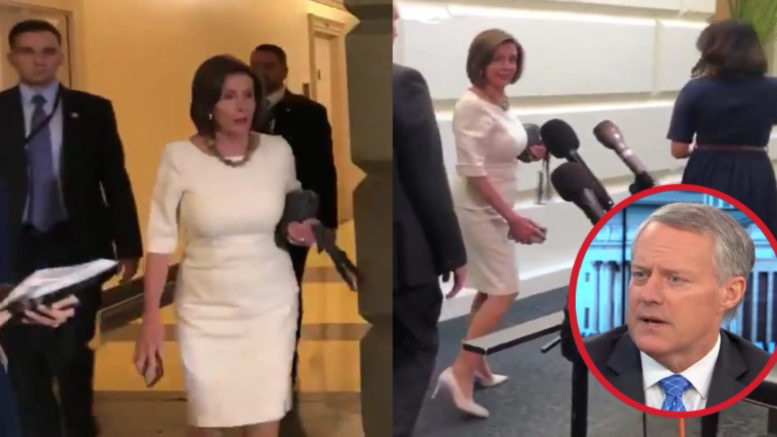 House Speaker Nancy Pelosi (D-CA) said Monday the House of Representatives will vote Thursday on a resolution to formalize the impeachment inquiry against President Donald Trump. It is not an actual article of impeachment, but rather a resolution that sets process ground rules.

“We are taking this step to eliminate any doubt as to whether the Trump administration may withhold documents, prevent witness testimony, disregard duly authorized subpoenas, or continue obstructing the House of Representatives,” Pelosi said.

Rep. Jim McGovern (D-Mass.), the chairman of the House Rules Committee, said Monday that he will introduce a resolution this week to “ensure transparency” and “provide a clear path forward” in the impeachment inquiry. The text of the resolution has yet to be released, but McGovern plans to introduce it Tuesday ahead of a markup in his committee Wednesday. A senior Democratic aide said that the resolution is expected to hit the House floor on Thursday, reported The Hill.

Even as she announced a formal vote, Pelosi insisted Monday that this argument “has no merit.” Pelosi said, “This resolution establishes the procedure for hearings that are open to the American people, authorizes the disclosure of deposition transcripts, outlines procedures to transfer evidence to the Judiciary Committee as it considers potential articles of impeachment, and sets forth due process rights for the president and his counsel,” reported Fox News.

However, NBC reporter Alex Moe, caught up with Pelosi on Monday evening and asked her about the “impeachment resolution” that the House of Representatives is reportedly going to vote on Thursday. (Continued Below)

“Speaker, can you have you talk about the ‘impeachment resolution,'” Alex Moe asked Pelosi as she walked by.

Pelosi responded, “It’s ‘not’ an ‘impeachment resolution,'” then walked off.

Rep. Mark Meadows (R-SC) caught wind of Pelosi’s comment, posted the video of her confusing statement on Twitter and asked, “What in the world?” (Video Below)

What in the world? https://t.co/4eMVpvqWDF

Meadows had also tweeted when the announcement of the House vote that will take place on Thursday: “House Democrats now suddenly saying they’ll vote on an impeachment resolution to “ensure transparency” is rich—considering they’ve spent weeks conducting interviews in secret, leaking their own talking points while locking down any and all information that benefits the President”.

House Democrats now suddenly saying they'll vote on an impeachment resolution to “ensure transparency” is rich—considering they've spent weeks conducting interviews in secret, leaking their own talking points while locking down any and all information that benefits the President